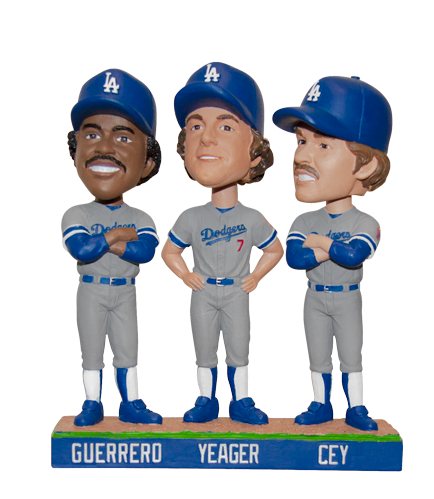 The Los Angeles Dodgers will salute the tri-MVPs of the 1981 World Championship—Ron Cey, Pedro Guerrero and Steve Yeager—at the annual Dodgers’ Old-Timers Game on Saturday, July 2 prior to the Dodgers-Colorado Rockies game.

The Old-Timers batting practice will begin at 4 p.m., followed by introductions at 5 p.m. and then the two-inning game.

The Dodgers and Rockies square off at 7:10 p.m. The first 40,000 fans in attendance will receive a bobblehead featuring the tri-MVPs presented by Security Benefit.

More information can be found by visiting www.dodgers.com/oldtimersgame. Tickets for the Old-Timers Game and the bobblehead featuring the tri-MVPs of the 1981 World Series presented by Security Benefit can be purchased by visiting www.dodgers.com/tickets or by calling 866-DODGERS. Fans can tune into the Old-Timers game which will air live on SportsNet LA.