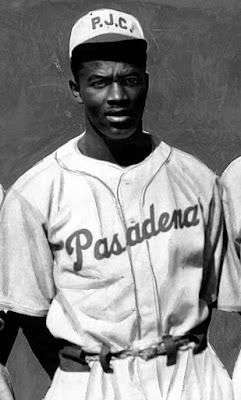 Press release from the office of Assemblyman Mike Gato -

Assemblyman Mike Gatto (D-Los Angeles) introduced ACR 197 today to name a stretch of Interstate 210 after Brooklyn Dodgers Hall of Famer second baseman Jackie Robinson, who was raised in the City of Pasadena.  The measure, joint authored by Assemblyman Chris Holden (D-Pasadena), would create the "Jackie Robinson Memorial Highway,” on Interstate 210 between State Route 2 and Orange Grove Blvd, a commonly used route to Dodger Stadium for fans coming from the Eastern Los Angeles County.

“Jackie Robinson is not only an inspiring figure to us for his accomplishments in athletics, but also as a civil-rights-era trailblazer who advocated for social change,” said Assemblyman Gatto.  “His contributions to baseball and society have made an everlasting impression on our nation.”

Jackie Robinson is best known for breaking the color barrier in baseball when he debuted with the Brooklyn Dodgers in 1947 and for having his number, “42” retired by all of Major League baseball.  But before becoming a big-leaguer, Robinson excelled in basketball, football, baseball, and track at John Muir (Pasadena) High School and Pasadena City College.  He then transferred to the University of California at Los Angeles (UCLA) in 1939, where he became the first Bruin to letter in four sports: baseball, basketball, football, and track.

“It’s only fitting to honor Jackie Robinson by naming this stretch of highway near the home he grew up and lived in,” said Gatto, whose father and uncles were present at Dodger Stadium in 1972 when Robinson had his number retired.  “The sacrifices and differences he made will always be remembered.”

Mike Gatto is the Chairman of the Utilities & Commerce Committee and the longest-serving current member of the State Assembly.  He represents California’s 43rd Assembly District, which includes Los Angeles, Glendale, and Burbank. www.asm.ca.gov/gatto