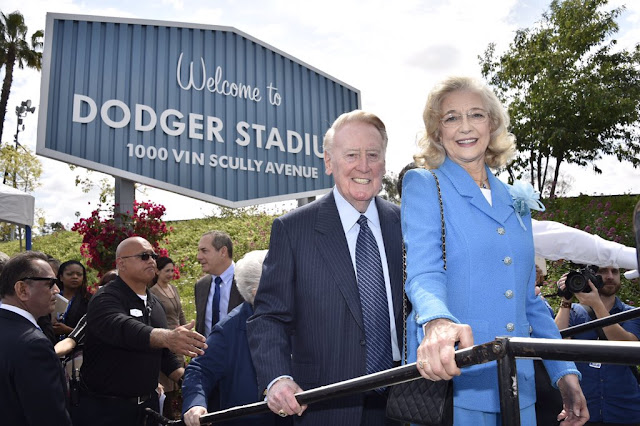 The Dodgers and the city of Los Angeles today dedicated Vin Scully Avenue in honor of Hall of Famer Vin Scully, who is in his 67th and final season in the broadcast booth for the Dodgers. The Hall of Famer’s 67 years of consecutive service with the Dodger organization is the longest of any sports broadcaster with one team. The motion to change Elysian Park Avenue to Vin Scully Avenue passed Friday and was spearheaded by First District Councilman Gil Cedillo.

“Vin is as much a part of the fabric of the Dodgers as the athletes whose exploits he has described to the delight of the fans for nearly seven decades,” said Kasten. “It is altogether fitting the avenue leading to the stadium where so much of that drama has unfolded bears his name.”

“Vin Scully is a Los Angeles treasure -- a man who has given life and voice to the story of baseball in our city since the day it began,” said Garcetti. “I am honored to stand beside the Dodgers today and pay homage to Vin on behalf of our city and on behalf of the generations of Angelenos who have been lucky enough to spend their summer afternoons with him.”

“The city is thrilled to be honoring such a legend in Los Angeles. Dodger fans span beyond the First District and beyond the city of Los Angeles, with everyone knowing the voice of Vin Scully,” said Cedillo. “When Angelenos attend a Dodger game, they will now say, ‘turn on to Vin Scully Ave.’ Vin will be immensely missed, but we wish him well as he kicks off his final season in broadcasting. We would also thank the Los Angeles Dodgers for planting more than 40 new trees and repairing much needed sidewalks along the street.”

The Dodgers have their home opener tomorrow against the Arizona Diamondbacks at 1:10 p.m., which is sold out. Special pregame ceremonies will honor Scully. Fans are encouraged to arrive early. The Dodgers will pay tribute to Scully and his Hall of Fame career throughout the 2016 season: Tuesday, May 10 (7:10 p.m. vs. Mets), with Vin Scully Avenue T-Shirt night presented by Mercedes Benz of Southern California; Tuesday, September 20 (7:10 p.m. vs. Giants), with Vin Scully Bobblehead night, the final bobblehead giveaway of the season during the final regular season series at home; and Friday, September 23 (7:10 p.m. vs. Rockies), with Vin Scully Appreciation Night to include special pregame ceremonies, opportunities for fans to thank and pay tribute to Scully and Friday Night Fireworks presented by Denny’s set to Scully’s top calls of his career spanning more than six decades. The 2016 Los Angeles Dodgers Yearbook also features a special tribute to Scully, traveling from the start of his Dodger career in 1950 to the present.

The Dodgers also announced today a special 11-game mini plan that will offer fans the opportunity to secure tickets to every game featuring a tribute to Scully, in addition to every game after Opening Day, and is currently the only way to get tickets to attend Vin Scully Appreciation Night on September 23. More details can be found by visiting www.dodgers.com/miniplans.