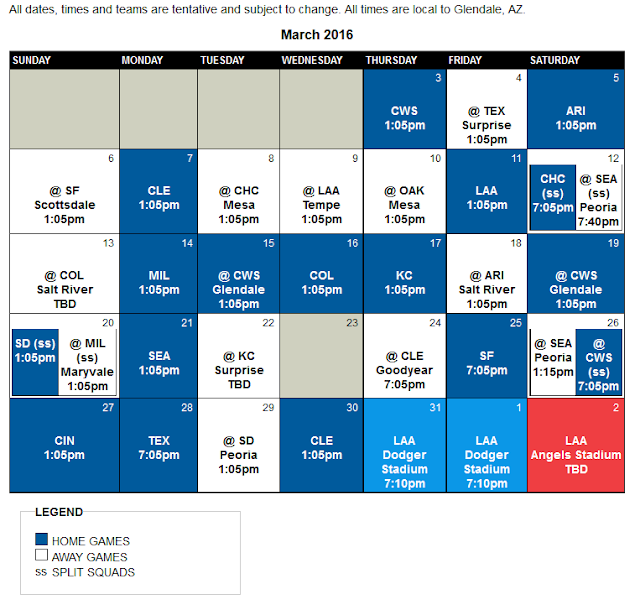 The Dodgers will play 17 of their 30 Cactus League games at Camelback Ranch – Glendale, including 15 home dates. The club has at least one home game during each of the four Cactus League weekends, providing fans ample opportunity to make the five-hour drive or one-hour flight to the desert. Camelback Ranch features a state-of-the-art ballpark, six practice fields on the Dodger side, including a replica Dodger Stadium field, fan photo elements commemorating Dodger history, walking trails, an orange grove and a five-acre lake.

The Dodgers will be at home the entire weekend of March 25-27, taking on the Giants Friday night (7:05 p.m.), before battling the White Sox on Saturday night (7:05 p.m.) and the Reds on Sunday afternoon (1:05 p.m.). Los Angeles will also be at home on St. Patrick’s Day, March 17, when they square off against the defending World Champion Royals at 1:05 p.m.

After returning from Arizona, the club will conclude its exhibition schedule with three games against the Angels March 31-April 2, including 7:10 p.m. games at Dodger Stadium on Thursday March 31 and Friday April 1.

Tickets for games at Camelback Ranch – Glendale start as low as $9. Season tickets, mini-plans, group tickets and suites are all available now at www.dodgers.com/spring or by calling (623) 302-5000. Single-game Spring Training tickets go on sale on Monday, January 11, 2016 and a full schedule of promotions is available at www.camelbackranchbaseball.com. For more details, including special ticket and mini-plans for 2016, please visit dodgers.com/spring.
Posted by Roberto Baly at 9:00 AM