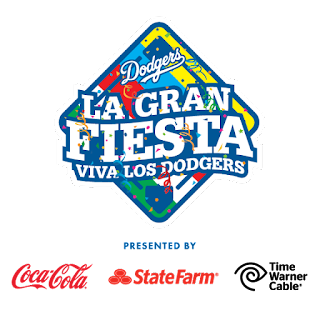 The Dodgers will play host to their 18th annual Hispanic Heritage celebration, La Gran Fiesta Viva Los Dodgers presented by Coca-Cola, State Farm and Time Warner Cable tomorrow from 2:00 p.m. to 6:00 p.m. at the historic 76 station. La Gran Fiesta Viva Los Dodgers is free for fans holding a ticket to tomorrow’s game. Tickets must be presented for admission. The Dodgers take on the San Diego Padres at 6:10 p.m. tomorrow and tickets can be purchased by calling 866-DODGERS or by visiting www.dodgers.com/tickets.

La Gran Fiesta Viva Los Dodgers is the culmination of the season-long series of family-friendly events celebrating Latino culture in Los Angeles and the legacy of Latino Dodgers past and present. La Gran Fiesta Viva Los Dodgers presented by Coca-Cola, State Farm and Time Warner Cable will feature activations by Dodger sponsors including: Kellogg’s, Sports Authority, Time Warner Cable, Chef Merito, 76, Anheuser-Busch/Montejo, Coca-Cola, State Farm, Gazillion Bubbles, Loan Mart, AstraZeneca, SportsNet LA, AM 570, Gavina and Welk Resorts. AstraZeneca will offer free lipid screenings and cholesterol education to fans 18 and older as part of their “Make Your Move Across America” campaign, a dynamic health initiative designed to educate consumers about the importance of knowing their lipid levels and the cardiovascular risks associated with elevated cholesterol. Visit www.MakeYourMoveAcrossAmerica.com to learn more about your cholesterol and find other stops on the tour.

In celebration of Hispanic Heritage month, the Dodgers are offering fans a special event ticket package that includes a ticket to tomorrow’s game and access to La Gran Fiesta Viva Los Dodgers. Additionally, fans that purchase this ticket package will receive a limited-edition Adrian Gonzalez/Hispanic Heritage T-shirt which was chosen by Gonzalez. It features “Los Dodgers” on the front and Gonzalez and number 23 on the back. It is green, red and white, the colors of the Mexican flag, in honor of Gonzalez’s Mexican heritage. More than 3,000 packages have already been sold and a limited number of the Dodgers’ Hispanic Heritage ticket package, which includes the Gonzalez T-shirt, can be purchased by visiting www.dodgers.com/Latino.

As part of Adrian Gonzalez’s Viva Los Dodgers program, families from Toberman Park Recreation Center and Normandie Park Recreation Center will be in attendance courtesy of Gonzalez and wife Betsy. The Gonzalez family plays host to 72 fans each Viva Los Dodgers game (18 families of four) and provides one parking pass per each group of four each season. Tickets in the All-You-Can-Eat right-field pavilion are provided and include unlimited Dodger dogs, nachos, popcorn, peanuts and Coca-Cola products.

All appearances are subject to change. Please note for player appearances timing is approximate. Fans are encouraged to arrive early.

Tomorrow, October 3 at the 76 station