Quakes and Dodgers Agree to Extension

This is good news! 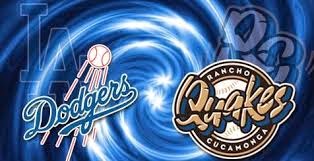 The Rancho Cucamonga Quakes are proud to announce that the Quakes and the Los Angeles Dodgers will continue their Player Development Contract (PDC) for the next two years, as the two teams have signed a two-year extension, through the 2016 season.

Since their partnership began just prior to the 2011 season, the Quakes and Dodgers have enjoyed an incredible relationship. The highlights are plentiful, including two trips to the California League Playoffs for the Quakes, a record-setting victory total in 2011, a Quakes vs. Dodgers Exhibition Game right here in Rancho Cucamonga and countless major league rehabbers, including current National League Cy Young and MVP favorite, Clayton Kershaw, just this past season here at LoanMart Field.

"The partnership between the Quakes and the Dodgers has proven to be a great fit for this community,” said Quakes Vice President/General Manager Grant Riddle.  “The Dodgers have been an awesome partner over the last four years and our fans have really enjoyed the many Dodger rehabbers here at LoanMart Field, as well as tracking all the former Quakes, as they make their way to Dodger Stadium.  We're excited to continue our relationship into the future and look forward to the Dodgers' potential upcoming playoff run this October!"

"We are very excited to be back in Rancho for another two years," said Dodger Vice President, Player Development De Jon Watson. "The assistance from the front office has been tremendous and I'm really happy that our players will once again be strongly supported by the community of Rancho Cucamonga."

The Quakes just recently wrapped up their 22nd year in the California League, but are already making plans for the upcoming 2015 season, which will be highlighted by the California League vs. Carolina League All-Star Game, set to take place at LoanMart Field on Tuesday, June 23 of next season.  Become a Quakes MVP (Most Valuable Partner) by purchasing a Quakes' Ticket Package and get the opportunity to purchase tickets to the All-Star Game prior to the general public.  Season Tickets, Mini-Season Tickets and Group Tickets are now on sale for the upcoming 2015 season, by calling (909) 481-5000.  We hope to see you at LoanMart Field very soon. Go Quakes!
Posted by Roberto Baly at 3:00 PM