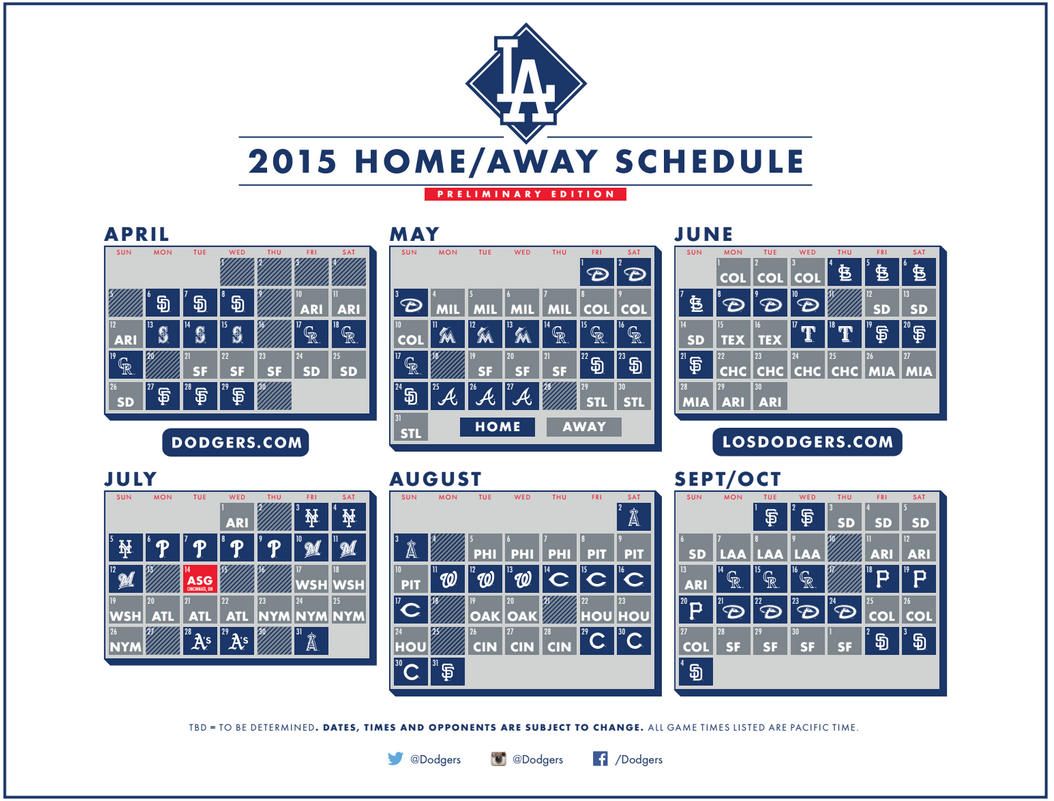 Major League Baseball today announced the preliminary schedule for the 2015 regular season. The Dodgers will begin the 2015 campaign at Dodger Stadium on Monday, April 6 vs. the San Diego Padres. The three-game series will run April 6-8 and marks the third time in the last eight seasons Los Angeles has kicked off the season opposing San Diego. The last time the Dodgers hosted the Padres on Opening Day was April 5, 2004.

The Dodgers begin their road schedule on April 10 in Arizona and close out the regular season with three games against the Padres at Dodger Stadium from Oct. 2-4. The San Francisco Giants visit Dodger Stadium for the first time on April 27 and for the final time on Aug. 31. American League teams that will visit Los Angeles throughout the 81-game home slate are the Seattle Mariners from April 13-15, the Texas Rangers from June 17-18, the Oakland A’s from July 28-29 and the rival Los Angeles Angels of Anaheim from July 31-Aug. 2.

Interleague road dates for the Dodgers in 2015 include travel to Texas (June 15-16), Oakland (Aug. 18-19) and Houston (Aug. 21-23). The Dodgers will head to Anaheim for an unprecedented September Freeway series against Angels from Sept. 7-9. The Dodgers play a home and home two-game series against the Rangers beginning at Globe Life Park in Arlington on June 15 and concluding three days later in L.A. on June 18.

The holiday schedule for Dodger fans next year sees the Boys in Blue at home on Memorial Day (Monday, May 25 vs. ATL), Father’s Day (Sunday, June 21 vs. SF) and Saturday, July 4 (vs. NYM).

The Dodgers will join all Major League clubs in celebrating Jackie Robinson Day on Wednesday, April 15 and will play host to the Seattle Mariners at Chavez Ravine for an Interleague matchup and special pregame ceremonies.

The Dodgers’ 2015 preliminary schedule can be found at www.dodgers.com, with an official schedule, game times and a full slate of promotional items to be announced later.

Deposits for 2015 season tickets are currently being accepted by the Dodgers. Complete details can be found by visiting www.dodgers.com/seasontickets.
Posted by Roberto Baly at 3:00 PM