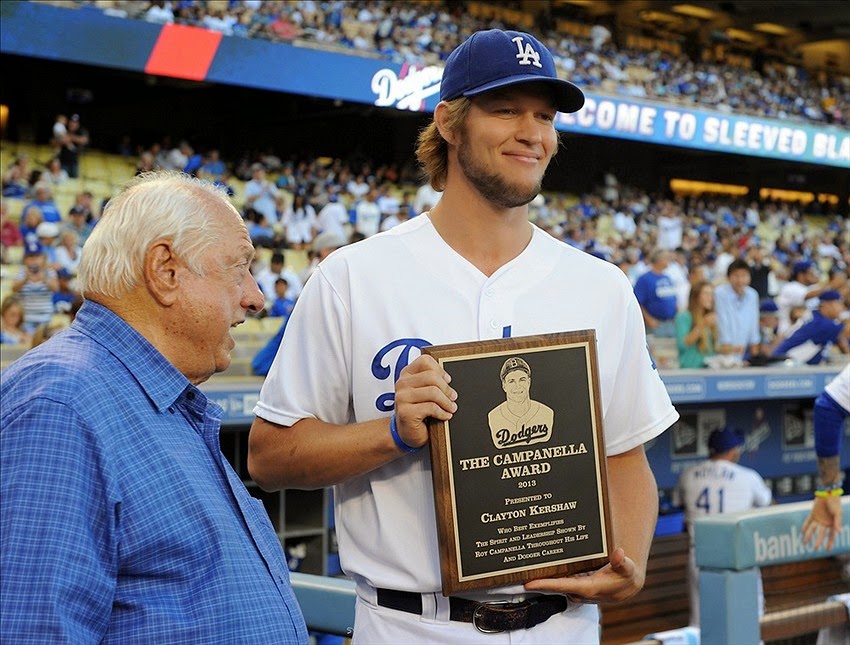 The Los Angeles Dodgers announced today that left-handed pitcher Clayton Kershaw was named the winner of the ninth annual Roy Campanella Award, which is given to the Dodger player who best exemplifies the spirit and leadership of the late Hall of Fame catcher. The award, which was voted upon by Dodger uniformed personnel, will be presented to Kershaw by Campanella’s daughter, Joni Campanella Roan, and Special Advisor to the Chairman Don Newcombe during pregame ceremonies tonight.

The Campanella Award is the first of what figures to be a multitude of awards the left-hander will take home after this season, as he has put together one of the best years by a hurler in Major League history. The Texas native is currently the only pitcher in baseball with 20 wins and he has accomplished that in just 26 starts, joining Pedro Martinez (1999) as the only pitchers since World War II to win 20 games in under 30 starts. Kershaw also leads the Major Leagues in ERA by a wide margin (1.80) and with one start remaining has an outside chance of winning his second “triple crown” as he currently trails Washington’s Stephen Strasburg by seven strikeouts. Kershaw will most likely be the first pitcher in baseball history to have the best ERA in the Major Leagues four consecutive seasons.

The 26-year-old made his fourth consecutive All-Star team this season and made his fourth consecutive Opening Day start for the Dodgers. On June 18, Kershaw no-hit the Colorado Rockies, allowing just one runner to reach base (via error) and struck out 15 in what is widely considered to be one of the three or four greatest single-game performances in baseball history. He won the NL Pitcher of the Month award in both June and July and took home NL Player of the Week honors twice this season.

Kershaw and his wife, Ellen, have made a significant impact off the field throughout his seven-year career, hosting the second annual Ping Pong 4 Purpose earlier this month to raise money for their charity organization, Kershaw’s Challenge, which encourages people to make a difference by giving back to at-risk children and communities in need. The charity has provided assistance to a variety of organizations, including to its cornerstone charity, “Arise Africa,” which helped the Kershaws build and sustain an orphanage for children in Lusaka, Zambia, called “Arise Home,” along with the Dream Center in Los Angeles, Cure International in Zambia and Mercy Street in their hometown of Dallas, Texas. For his charity work, Kershaw was recognized by Major League Baseball with the 2012 Roberto Clemente Award as the baseball player who best represents the game through positive contributions on and off the field, including sportsmanship and community involvement. He was once again nominated for the award by the Dodgers this season and is also in the running for the Marvin Miller Man of the Year Award, handed out by the Major League Baseball Players Association.

He was inducted into the National Baseball Hall of Fame in 1969 and was among the first three Dodgers to have their uniform numbers retired alongside Jackie Robinson and Koufax. Campanella remained active in the Dodgers’ Community Relations Department until his death on June 26, 1993 at the age of 71.
Posted by Roberto Baly at 4:30 PM