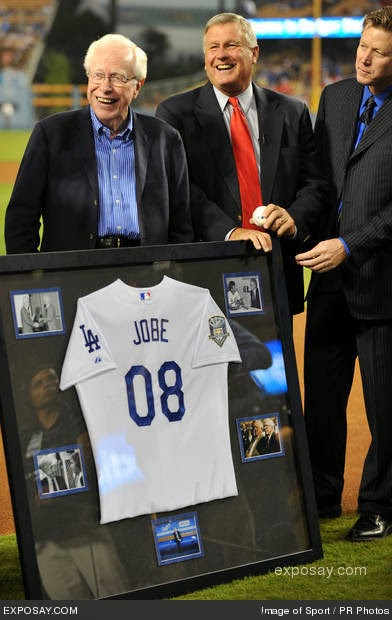 Dr. Frank Jobe, who has served the Los Angeles Dodgers’ organization for the past 50 years and who was a pioneer in the field of sports medicine, died this morning in Santa Monica at the age of 88, his family announced.

“Frank Jobe is a Hall of Famer in every sense of the word,” said Dodger President Stan Kasten.  “His dedication and professionalism in not only helping the Dodgers, but athletes around the world is unparalleled.   He was a medical giant and pioneer and many athletes in the past and the future can always thank Frank for finding a way to continue their careers.”

"I was deeply saddened to learn of the loss of Dr. Frank Jobe, a great gentleman whose work in Baseball revolutionized sports medicine,” said Baseball Commissioner Allan “Bud” Selig.  “Since 1974, his groundbreaking Tommy John surgery has revitalized countless careers, especially those of our pitchers.  His wisdom elevated not only the Dodgers, the franchise he served proudly for a half-century, but all of our Clubs.

"Dr. Jobe's expertise, as well as his enthusiasm to mentor his peers, made the National Pastime stronger.  On behalf of Major League Baseball, I extend my deepest condolences to Dr. Jobe's family, friends, Dodger colleagues and the many admirers of his pioneering spirit throughout our game."

”Baseball lost a great man and Tommy John lost a great friend,” said former Dodger Tommy John.  “There are a lot of pitchers in baseball who should celebrate his life and what he did for the game of baseball.  My deepest condolences and prayers go out to Beverly and the entire family.  He’s going to be missed.”

Jobe, who began his association with the Dodgers in 1964, when he joined his mentor, the late Dr. Robert Kerlan, made medical history in 1974 when he performed what is now termed “Tommy John surgery.”  Jobe took over the full-time care of the Dodgers in 1968 and was named a Special Advisor to the Chairman of the team seven years ago.

A legend in the field of sports medicine, it was 40 years ago Jobe made history and altered the sport of baseball forever.

Tommy John was diagnosed with a ruptured medial collateral ligament (MCL) in his left elbow, an injury that previously had no cure.  On Sept. 25, 1974, Jobe tried a procedure in which he removed a tendon from John’s forearm and repaired his elbow.  John, who had won 124 games prior to the operation, went on to pitch 14 years after the operation, compiling 164 more victories in that time, without ever missing a start due to elbow problem.

Since then, Jobe performed hundreds of Tommy John surgeries on pitchers at every level, helping to resurrect the careers of countless big leaguers. His fellowship program at the Kerlan-Jobe clinic has trained more than 250 fellows through the years.

On Feb. 21, 2008, the Dodgers announced that Jobe had been promoted to special advisor to the chairman and he took part in a special pregame ceremony at Holman Stadium in Vero Beach, FL. Jobe was honored again in front of the home crowd at Dodger Stadium on Sept. 23, 2008 in a ceremony that included his two most famous patients, John and former Dodger Orel Hershiser, among others.

Of course, since Jobe’s experiment on John, several things have changed about the procedure. What was once a four-hour surgery can now be performed in about one hour.  The success of the procedure not only depends on the surgery, but the surgeon, the player and the rehabilitation program. Though Jobe originally put John’s chances of returning to the Major Leagues at less than five percent, Jobe estimated that 92 to 95 percent of patients return as good, if not better, than prior to the surgery.

In fact, the procedure has become so valuable that in recent years, players have signed multi-year contracts just months after they have the surgery in expectation of a high-level return.

Thanks to his passion to help players return to the field, Jobe found himself in the right place again 16 years after saving John’s career, as he reconstructed the right shoulder of former Cy Young Award winner Hershiser, another procedure that had never been successfully performed on a Major League pitcher.

Hershiser’s rehabilitation was a success and he presented Jobe with the game ball from his 100th career victory, which came in 1991, his first win after the surgery. Former Dodger Darren Dreifort made a similar gesture while rehabilitating at Dodger Stadium. His trophy featured a plastered replica of Dr. Jobe’s hands holding a surgical instrument with a handwritten message from the Dodger pitcher.

Jobe, a native of Greensboro, NC, who studied at Loma Linda University, School of Medicine and did his residency at Los Angeles County Hospital, has often been mentioned as a candidate for enshrinement in the National Baseball Hall of Fame and Museum, alongside other non-playing personnel like former Dodger owner Walter O’Malley.  Jobe was honored at Cooperstown on July 27, 2013 as part of the Hall of Fame awards presentation for his development of Tommy John surgery.

He received the President’s Award at the Southern California Sports Broadcasters’ annual awards luncheon on Jan. 27, 2014. At their annual dinner in January 2012, Jobe was honored by the Professional Baseball Scouts Foundation with the Dave Winfield Humanitarian Award. Jobe was inducted by the
Baseball Reliquary into the Shrine of the Eternals on July 20, 2012. He was also inducted into the PBATS
(Professional Baseball Athletic Trainers Society) Hall of Fame in the spring of 2012. In honor of the 30th
anniversary of his ground-breaking efforts, the Dodgers honored Jobe on March 31, 2004 prior to a Spring Training game in Vero Beach, FL, and again during the year at Dodger Stadium.

Jobe will be remembered by his family, colleagues and patients not only as a great surgeon, but also as a true Southern gentleman.  The family plans a celebration of his life.