The greatest is on the cover - 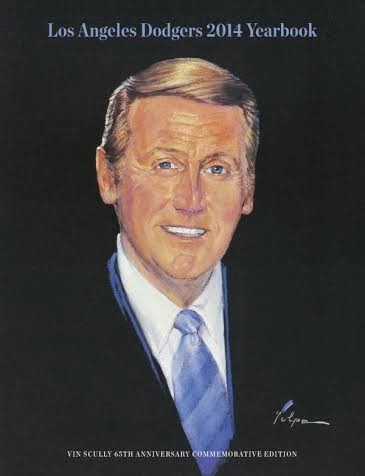 Celebrating this incredible achievement by a truly legendary broadcaster, the Los Angeles Dodgers’ 2014 Yearbook will commemorate Scully’s years calling all the action with an unprecedented 21-page section entirely in Scully’s words, discussing his life and career at length.

Dodger Insider is the new name for the team’s official game program, with the April issue hot off the presses at the Dodgers’ home opener against the San Francisco Giants on Friday, April 4, and new editions will be published monthly through October.  The program debuted in March at the opening of Spring Training at Camelback Ranch in Arizona.

Scully sat down with Jon Weisman, the Dodgers’ Director of Digital and Print Content, for the interview.  Among the topics Scully discussed are his childhood and adolescence, his ascension to the broadcast booth, his move to Los Angeles and his thoughts about such players as Sandy Koufax, Fernando Valenzuela, Clayton Kershaw and Yasiel Puig.  The interview is punctuated by personal anecdotes by Scully as he reflects on his life and career.

The 2014 Yearbook also features a month-by-month review of the Dodgers’ Western Division championship 2013 season, a detailed look at the 2014 roster and information about the team’s community efforts, minor league talent and Dodger Stadium improvements, as well as a tribute to Dodgers’ physician Dr. Frank Jobe, who passed away March 6.  One of the greatest medical advancements Jobe developed was “Tommy John” surgery, which has prolonged the careers of many Major League pitchers.

While lefthander Scully graces the cover of the Dodgers’ Yearbook, another outstanding lefthander--Cy Young Award winner Clayton Kershaw--is featured on the cover of April’s Dodger Insider.  Inside the magazine, the Kershaw story explores how he came to be the preeminent pitcher in baseball and how he has been influenced by his wife, Ellen, and their annual charitable excursions to Africa.

As part of a more dynamic content approach, Dodger Insider’s April magazine contains more than 30 stories in all, touching nearly every aspect of the organization on and off the field.  Included are such pieces as the advent of instant replay and how it would have changed Dodger history, an interview with Don Mattingly about his approach and influences, an insider’s look at Chad Billingsley’s recovery from Tommy John surgery, stories on the Dodger farm system and a retrospective timed to the 60th anniversary of Walter Alston’s managerial debut.

Dodger Insider serves as a companion to the Dodger Insider blog, located at www.dodgers.com/insider and published multiple times daily.  With interviews, video highlights, analysis, think pieces and more, the blog and magazine versions of Dodger Insider aim to satisfy the casual and hardcore Dodger fan alike by covering the entire Dodger universe.

Dodger Insider magazine and the 2014 Los Angeles Dodgers Yearbook are on sale throughout Dodger Stadium, including the Top of the Park store (open daily and during home games), and online at dodgers.com/magazine.  Subscriptions to the magazine can be ordered at any time.  A digital version of Dodger Insider magazine, featuring embedded video links, is also available.
Posted by Roberto Baly at 9:00 PM