Dodgers getting all the Cubans. 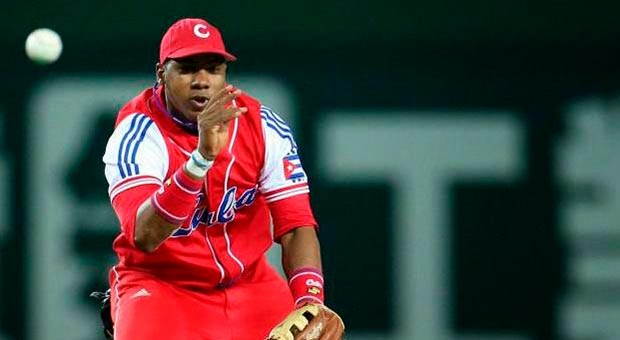 “Signing Arruebarrena gives us another very good middle infielder, who is an outstanding defender,” said Dodger General Manager Ned Colletti. “It continues our efforts internationally to add talent that can positively affect the Major League club - be it immediately or in the very near future.”

Arruebarrena, 23, posted a .276 batting average with 67 doubles, 25 triples, 27 homers and 171 RBI in 437 career games in six seasons for Cienfuegos in the Cuban Serie Nacional from 2007-2013. The 6-foot-1, 200-pounder, who is known for his defense, has appeared primarily at shortstop during his career, but has also played second base and third base professionally. With Cienfuegos during the 2012-13 season, Arruebarrena hit .293 with a .366 on-base percentage, six home runs and 32 RBI in 70 regular-season games before going 6-for-14 (.429) in six postseason contests.

“We are excited to sign Erisbel, who we’ve scouted in international competition for a long time.” said Dodger Vice President, International Scouting Bob Engle. “He brings another superb glove to our organization.”

The Cienfuegos, Cuba native was the starting shortstop for his home country in the 2013 World Baseball Classic, batting .375 with a .444 on-base percentage, four runs scored and two RBI in six games in the tournament. He also played internationally for Cuba in the 2011 Pan American Games and batted .445 (8-for-18) with three runs scored, a double and an RBI in five games.

Arruebarrena (pronounced Arr-ru-eh-BAHR-ena) was a teammate of Dodger outfielder Yasiel Puig with Cienfuegos in 2010-11.

To create room on the 40-man roster, the Dodgers designated infielder Justin Sellers for assignment.
Posted by Roberto Baly at 11:20 AM

He is alive! Good to hear from you. I hadn't seem your blog in awhile. Hope you are well.