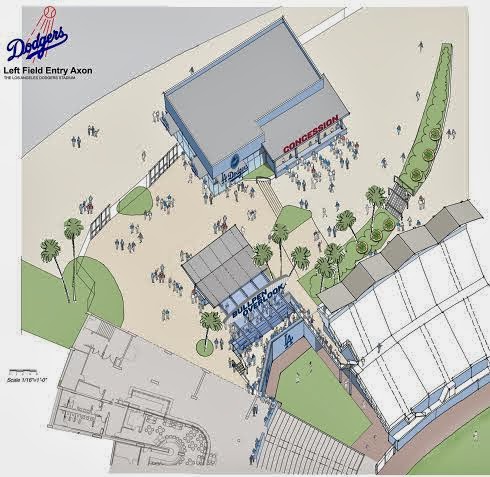 The Los Angeles Dodgers today announced plans for upgrades to 52-year-old Dodger Stadium for the 2014 season.

To continue on the program of improvements that began in 2012-13, the Dodgers have submitted plans to the City of Los Angeles for the following projects, expected to be completed in time for the 2014 season home opener April 4:

1. Expansion of the entries at the Field level, enabling all fans with Pavilion, Dugout, Field, Loge and Club tickets to enter the convenient entrances on the north side of the stadium. These new entries will also house new team stores and concessions and memorabilia to celebrate the team history, including its famous seasons in Brooklyn, NY, as well as its five-plus decades in Los Angeles.

2.  Seating and lounging areas at bars and drink rails overlooking the bullpens in the outfield, giving focus to pitchers warming up as well as infield game views.

3.  New food services with outdoor grills and specialty fare such as Tommy Lasorda's Italian and hot-off-the-grill BBQ, areas where the Hall of Fame manager and other former players will spend time with fans.

4.  An expansion of the popular Reserve Level "La Taqueria" stand near the kids play area at the left field Reserve entry.

6.  Continuing work on the upgrade of the electrical infrastructure that supports the 1962 stadium.  In 2013, significant new equipment and substations were installed in coordination with the Los Angeles Department of Water and Power. Work will continue this offseason to connect to the new equipment to improve safety and provide the best technology available for fans.

7.  Enhancement of the ballpark’s landscaping.  All 33 trees in the outfield area have been replanted on site and the Dodgers, the only team in baseball with a full-time arborist, will have three times as many trees in the outfield by April as before.  The display of the famed “Three Sisters” behind the left-field bullpen will remain.

“Dodger Stadium is one of the most fan-friendly and family-oriented venues in all of baseball,” said Dodgers President and CEO Stan Kasten.  “Our goal is to ensure that we maintain that elite status while continuing to do everything in our power to bring a world championship to Dodger fans.”

For the 2013 season, the team expanded the entrances at the Top Deck and Reserve levels; renovating and enlarging every restroom on the Top Deck, Reserve, Loge and Pavilion levels; adding concessions and team stores; rebuilding the hexagon-shaped scoreboards, sound systems, and scoreboard control room; rebuilding and doubling the size of the home team clubhouse, and replacing the 1962 power supply with modern equipment in order to add WiFi and cell service.

The best way for fans to collect 2014 promotional items and secure tickets for Opening Day and Interleague matchups is to purchase season tickets. More information on benefits in becoming a Dodger season ticket holder can be found by calling 323.DODGERS or visiting www.dodgers.com/seasontickets. 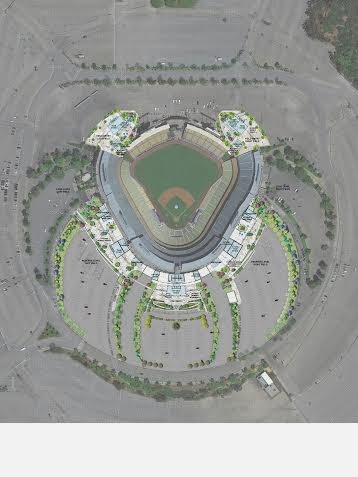