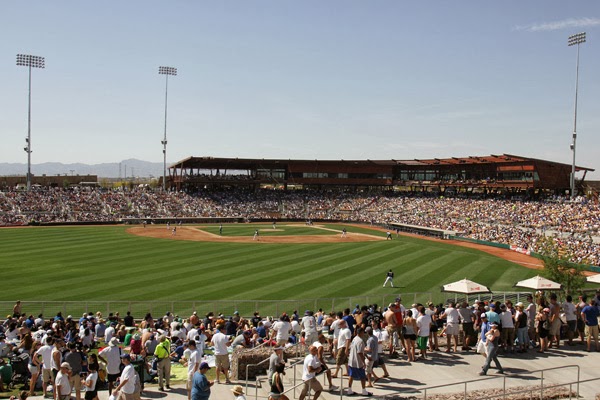 Single-game tickets start at just $8 per game, and fans can save by purchasing tickets in advance. Tickets sold on game days are subject to a $3 increase per ticket.

Weekends at the Ranch — At all Friday-Sunday home games, indicated as Weekend Premier games on the schedule, Dodgers fans can expect a unique Spring Training experience, including live music, roaming entertainers, alumni and legends appearances, and scheduled autograph signings.

Weekend Premier Legends Deck — New in 2014 at all Weekend Premier games, the upscale Legends Deck will be an all-inclusive ballpark experience featuring baseball fare and non-alcoholic beverages. The Legends Deck will be hosted by team alumni who will mingle, pose for photos and sign autographs. The Legends Deck is completely shaded and seats only 100 fans per game.
Schedule — Camelback Ranch-Glendale, the sixth-year spring home of the Los Angeles Dodgers and Chicago White Sox hosts spring-training baseball fromFebruary 27-March 26 this spring.
The Dodgers open the 2014 CR-G slate of games with a 1:05 p.m. contest against the Arizona Diamondbacks on Thursday, February 27. The Dodgers play at The Ranch 13 times before departing for regular season-opening games against the Diamondbacks in Australia. The Dodgers’ final 2014 spring game at CR-G isSunday, March 16 vs. the Colorado Rockies.

CR-G hosts two day-night doubleheaders in 2014 including Saturday, March 15(Dodgers-Padres at 1:05 p.m., White Sox-Dodgers at 7:05 p.m.).
Other Promotions
• Seniors Stroll The Bases (Wednesdays): After every Wednesdaygame, seniors stroll the bases.

• Spring Break Special (March 18-26): $3 lawn seats for children (12 and under, maximum of four discounted tickets per full-price adult ticket). Available only on game day at the ticket office.