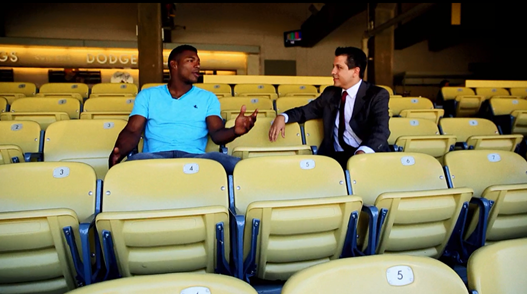 Looking forward to watch this interview.

The sit-down interview will be presented by the special correspondent for the network, Enrique Aníbal Gutiérrez.  In one of many interesting revelations during their conversation, when Puig was asked about how he felt about other sports, he confessed that, “to play, I like baseball. But, if I want to enjoy myself, I’d much rather play soccer or basketball”.

To see a short preview of the half-hour special, click here.

Recently, the “Historias Detrás…” series kicked off a yearlong season of interviews with a one-on-one interview with Pau Gasol from the Los Angeles Lakers.  Amongst the more highly-anticipated interviews to be featured this year are conversations with legendary and former Mexican soccer greats including, Luis Roberto Alvez, Manuel Negrete and Jared Borgetti, among others.

This new “Historias Detrás…” series is an expansion of the original, one-on-one interview show, Historias Detrás Del Balón, which made its debut during the network’s inaugural year on the air and brought viewers an unprecedented look into the lives of some of Latin America’s most beloved professional soccer stars past and present.  In more than thirty sit-down interviews, Time Warner Cable Deportes brought audiences closer to figures including the legendary Hugo Sánchez, Andrés Guardado and from Chivas de Guadalajara, Ramón Morales.

For more information on the series and to get find the latest on its programming schedule, please visit: www.twcdeportes.com/shows/historias-detras
Posted by Roberto Baly at 3:30 PM