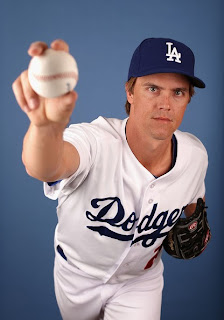 Los Angeles Dodgers starting pitcher Zack Greinke has been voted National League Pitcher of the Month for the month of August. It marked the second consecutive month that a Dodger pitcher claimed the award, following his fellow Cy Young Award-winning teammate Clayton Kershaw in July, and the first time that Los Angeles pitchers won the award in consecutive months since August-September 1975 (Burt Hooton, twice). The last N.L. team to have two different pitchers win Pitcher of the Month honors in consecutive months was the Washington Nationals in April and May 2012 (Stephen Strasburg – April; Gio Gonzalez – May).

Greinke was a perfect 5-0 in five August starts, tying for the Major League lead in wins while posting a 1.23 ERA (five earned runs in 36.2 IP), which was good for the fourth-lowest mark among qualifying Major League pitchers. His .211 (28-for-133) opponents’ batting average was tied for the eighth-lowest mark among N.L. hurlers. The Florida native fanned 30 in his 36.2 innings of work while walking just eight batters. Greinke helped the N.L. West-leading Dodgers to a 23-6 record during the month of August and combined with the rest of the Dodger pitching staff to post a 2.07 team ERA during the month, ranking first in the Majors.

On August 5, Greinke out-dueled St. Louis Cardinals ace Adam Wainwright to earn his ninth win of the 2013 campaign. The 29-year-old scattered eight hits over 6.1 innings of work while allowing just two runs in a 3-2 victory at Busch Stadium. Greinke helped his own effort with the bat as well, driving in the eventual winning run with a line-drive single off Wainwright in the top of the seventh frame. On the season, Greinke now boasts a .347 (17-for-49) batting average with two doubles and four RBI. On August 10, making just his second career start against the Tampa Bay Rays (first as a Dodger), Greinke turned in another strong performance, hurling 6.1 shutout innings with seven strikeouts en route to a 5-0 win. He continued his scoreless ways in his next start, tossing 7.1 shutout innings in a 4-0 win over the Philadelphia Phillies at Citizens Bank Park on August 16. The 2009 A.L. Cy Young Award winner held the Phillies to just three hits in the contest as he ran his scoreless innings streak to 12.2. In his August 21 start at Miami, the veteran right-hander pitched 8.0 innings of one-run ball in a 4-1 victory over the Marlins. After allowing a first-inning homer to Giancarlo Stanton, he settled down quickly, scattering just five more hits while fanning seven en route to his 12th win of the season. On Thursday against the Chicago Cubs at Dodger Stadium, Greinke won his fifth consecutive start, leaving the game just one out shy of his second complete game of the season. He allowed two runs on five hits in his 8.2 innings of work while tying a season high with nine strikeouts on 122 pitches. This marks his second career monthly award, having won previously in April 2009 as a member of the Kansas City Royals.

The National League Pitcher of the Month for August 2013, Zack Greinke will receive a specially designed trophy, suitably engraved, to commemorate his performance.