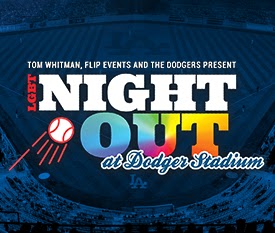 It is also LGBT (Lesbian, Gay, Bisexual and Transgender) Night out at Dodger Stadium.

As part of LGBT Night, Amber Riley, along with members of the Gay Men’s Chorus of LA, will sing the national anthem. Riley, best known for her role on FOX’s Golden Globe, Peabody and SAG Award winning musical comedy “Glee,” can currently be seen on season 17 of ABC’s “Dancing with the Stars.” Former Dodger Billy Bean, the second MLB player who revealed his homosexuality, and NBA player Jason Collins, the first active male professional athlete on a major North American team sport to come out publicly as a homosexual, will throw the ceremonial first pitch. Lance Bass of NSYNC, who came out in a cover story for “People Magazine” in 2006 will officially start the game with “It’s Time For Dodger Baseball!” Friday Night Fireworks will be set to music by DJ Manny Lehman.

Tonight’s Veteran of the Game is U.S. Army Sergeant Daniel Holmes of Brownwood, Texas. Holmes enlisted in 2003 and become a Military Policeman stationed at Ft. Hood, TX.  Sergeant Holmes supported Operation Iraqi Freedom Two where he helped guard detainees and cleared people for customs. He has also served with the 6-30th Military Police Company in Bamberg, Germany.  Sergeant Holmes is currently stationed at the National Training Center at Fort Irwin, CA and serves as the primary broadcast journalist, responsible for producing news and feature stories for video and radio relating to soldiers of the Operation Group at Fort Irwin. His accolades include two Army Achievement, two Army Commendation Medals and a Combat Action Badge. 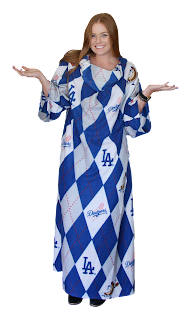 The first 40,000 fans in attendance will receive a Dodgers sleeved blanket presented by Farmer John. The game is sold out.

Yesterday, Clayton Kershaw was named the winner of the eighth annual Roy Campanella Award, which is given to the Dodger player who best exemplifies the spirit and leadership of the late Hall of Fame catcher. The award, which was voted upon by Dodger uniform personnel, will be presented to Kershaw by Campanella’s daughter, Joni Campanella Roan, during pregame ceremonies Saturday. Cary Roan, Roy Campanella’s grandson, will throw the ceremonial first pitch.

Adrian Gonzalez will also be recognized during pregame ceremonies on Saturday as the Dodgers’ 2013 nominee for the prestigious Roberto Clemente Award presented by Chevrolet. Gonzalez is one of the 30 Club finalists for the annual award, which recognizes a Major League Baseball player who best represents the game of baseball through positive contributions on and off the field, including sportsmanship and community involvement.

As a part of Fan Appreciation Day, fans in attendance will have the chance to win various prizes including: 2014 season tickets, roundtrip tickets to London on United Airlines, an HD TV from LG, game worn autographed Dodger jerseys, player meet-and-greet experiences, a visit from the Dodgers’ grounds crew, voicemail recorded by Hall of Famer Vin Scully, just to name a few prizes. Details on Fan Appreciation Day including a partial list of prizes can be found by visiting www.dodgers.com/fanappreciation.

Sunday’s ceremonial first pitch will be thrown by Austin Passy, a Grand Prize winner of the Dodgers Rewards program which rewards fans for engaging across multiple social media platforms. Dodgers Rewards which launched earlier this year has more than 13,000 registered users. Past prizes have also included batting practice viewing at Dodger Stadium, a Sandy Koufax signed baseball and a meet-and-greet with Yasiel Puig. More information on this program can be found by visiting www.dodgersrewards.com.

The Dodgers will hold a Postseason Rally following Sunday’s game and it’s free with a game ticket. Due to the Postseason Rally, Kids Run the Bases will not take place after the game Sunday. Dodger players including Adrian Gonzalez, Matt Kemp, Clayton Kershaw, Hanley Ramirez and Yasiel Puig, manager Don Mattingly and Hall of Famer Tommy Lasorda will partake in the Postseason Rally, which will be hosted by television talk show host Arsenio Hall. The Postseason Rally will include musical entertainment and a 2013 season highlights video that will be played on Dodger Vision.

In addition, immediately following Sunday’s game, two of the final prizes on Fan Appreciation Day will be awarded—two Dodger season tickets for 2014 as well as an all-expenses paid trip to Australia for two to join the Dodgers for their season opening games with the Arizona Diamondbacks.

Sunday’s Veteran of the Game is U.S. Marine Corps Corporal Mark Andrews of Long Beach. Andrew has a special Dodger connection as his grandfather, Gordon Hahn, a member of the Los Angeles City Council in the 1950’s, was the tenth and deciding council vote needed to bring the Dodgers to Los Angeles. He enlisted in 2009 and following his basic training at Camp Pendleton, Andrews went to Pensacola, Florida to train on a Mobile Electronic Warfare Support System to become a Signals Intelligence Operator. During his 2011 deployment to Afghanistan, Andrews and his fellow Marines were involved in a raid in the Helmand Province in which he sustained an injury to his leg from a gunshot. He now helps to train Marines in his job specialty and manages the barracks for the 1st Radio Battalion. Andrew’s accolades include the Purple Heart, Combat Action Medal and the Global War on Terrorism Medal.

The Los Angeles Dodgers Foundation have expanded the partnership with Vision to Learn to provide free eye exams and free glasses to elementary school students in low-income communities. As part of this Sunday’s pregame ceremonies, Dodgers A.J. Ellis and Brandon League as well as Dodger coaches and Dodger staff will sport customized Dodger blue eye glasses, which will be an option amongst the free eyeglass offered to students in need. Vision to Learn’s Founder and Chairman Austin Beutner will also be on hand for the launch of the Dodger blue eye glasses.