What's going on at Dodger Stadium for the four game series against the San Francisco Giants? 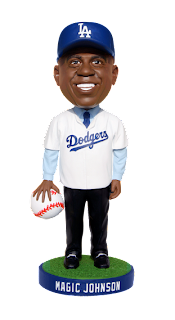 The first 50,000 fans in attendance will receive a Magic Johnson Bobblehead presented by Keck Medical Center of USC. With a sell-out crowd, all auto and stadium gates open early at 5:10 p.m. Winners of the #MeetMagic @Dodgers contest will get the once-in-a-lifetime opportunity to meet Dodger owner and Laker legend Earvin “Magic” Johnson tomorrow in a stadium suite.

Johnson’s Lakers’ teammate and member of five Lakers’ championship teams (‘80, ‘82, ‘85, ‘87 and ’88) Michael Cooper and Laker teammate Mychal Thompson who helped the Showtime Lakers win consecutive titles in ‘87 and ’88 will be on hand for the ceremonial first pitch tomorrow. Johnson, along with his Lakers’ teammates will officially start the game with “It’s Time for Dodger baseball!” Season three of “The Voice” top four finalist Trevin Hunte will perform the national anthem.

Veteran of the Game is U.S. Marine Sergeant Roland Vandenberg of Palmdale. He has served in numerous capacities including infantry squad leader, Platoon Sergeant and Foreign Advisor and currently serves as a Marine Corps Career Advisor and Canvassing Recruiter. Vandenberg’s deployments include Europe, Japan, Africa, Iraq and Afghanistan. His accolades include the Combat Action Medal and Navy Achievement Medal with a gold star in lieu of second award.

Fans are invited down to the field for Friday Night Fireworks presented by Denny’s immediately following the game. The fireworks show will be set to Latin music as part of the Dodgers’ observance of National Hispanic Heritage month which is celebrated annually from September 15 through October 15. Friday’s game is sold out.

Nick Ybarra, a 27-year-old Dodger fan from Whittier with Down’s Syndrome, will have his dream come true Friday. His story was featured on ABC News and he will throw the ceremonial first pitch Friday. International Jazz Saxophonist Michael Lington will perform the national anthem.

Friday’s Veteran of the Game is U.S. Air Force Major Anthony Hassan of Chicago, IL. Hassan served in the U.S. Army for 11 years leaving with the rank of Staff Sergeant.  He was commissioned as an officer in the Air Force in 1995, serving 14 years as the Mental Health Officer and Combat Stress Control Officer. His deployments include Saudi Arabia, East Africa and to Kuwait and Iraq in support of Operation Iraqi Freedom. Major Hassan’s accolades include the Air Force Meritorious Service Medal with four Oak Leaf Clusters and the Army Commendation Medal. Hassan is currently a Clinical Associate Professor at the USC School of Social Work, serving as the Director for the Center for Innovation and Research on Veterans and Military Families.

Adrian Gonzalez’s Viva Los Dodgers will host families from Alma Family Services, an organization that is dedicated to advancing the quality of life of families and individuals coping with a range of needs including significant emotional difficulties, substance abuse and/or developmental challenges by providing them with a range of quality community integrated multilingual and multicultural services. Gonzalez and his wife Betsy have hosted 72 fans per game (18 families of four) and provided one parking pass per each group of four throughout the 2013 season. This marks the last group of Adrian Gonzalez’s Viva los Dodgers and the Gonzalez family hosted more than 600 fans this season.

Veteran of the Game is U.S. Air Force Staff Sergeant Dereck Sutherland of Fullerton. Sutherland’s military occupation specialty is Imagery Intelligence Analyst for Special Operations working with helicopter assault forces; he determines what areas are safe for helicopters to land.  He has served deployments in Libya and two tours in Afghanistan. His accolades include the Air Force Achievement Medal and Professional Airmen of the year for his Squadron in 2012.

Sunday is World Alzheimer’s Day at Dodger Stadium. The Alzheimer’s Association is the world's leading voluntary health organization in Alzheimer’s care, support and research. Paul Fox, an award winning record producer, known for his work with the Wallflowers, Bjork, Phish and 10,000 Maniacs, will throw the cereomnial first pitch. Fox was recently diagnosed with early onset Alzheimer’s and is an active ambassador for the Alzheimer’s Association. Singer-songwriter T’Lark Galeas will perform the national anthem. Fans can purchase a special ticket for World Alzheimer’s Day at www.dodgers.com/ALZ using the promotional code ALZ.

Sunday’s Veteran of the Game is U.S. Marine Corporal Isai Oqueli of Fontana. Oqueli’s duties have included Field Artillery Cannoneer, Fire Team Leader and Platoon Sergeant. He currently serves as a Combat Correspondent, acting as a liaison between the Marine Corps and the entertainment industry in Los Angeles. Oqueli has served throughout the U.S. and participated in a combat tour to Afghanistan in support of Operation Enduring Freedom.

Tickets for Sunday’s game against the Giants can be purchased by visiting www.dodgers.com/tickets or by calling 866-DODGERS.
Posted by Roberto Baly at 12:00 PM