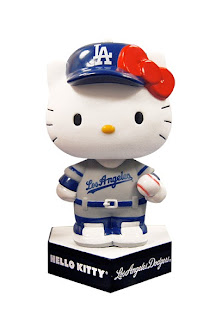 The first 50,000 fans in attendance will receive a Hello Kitty mini bobblehead. With a sell-out crowd, all auto and stadium gates open early at 5:10 p.m. Hello Kitty will be on hand and lead the crowd in “Take Me out to the Ball Game” from the field during the 7th inning stretch.

YouTube sensation Macy Kate will sing the national anthem and former Dodger All-Star Shawn Green will be on hand for pregame ceremonies. Monday’s Veteran of the Game is U.S. Army Reserves Major Casey Miner of Manhattan Beach. Miner has served in various capacities all over the world including an assignment at the Pentagon. He currently serves with the 311th Expeditionary Sustainment Command and just returned home from a 10-month deployment to Afghanistan. Miner developed a resiliency program that helps soldiers learn effective coping skills to avoid high-risk behavior and to help deal with stress. His accolades include two Bronze Stars, four Meritorious Service Medals and the Global War on Terrorism Medal. 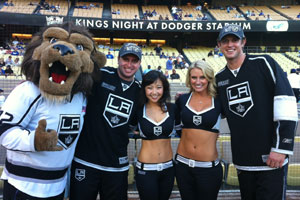 This event is the latest in a series of Kings-Dodgers promotions. On April 18 the Kings hosted the fourth annual Dodgers Pride Night With The Kings at STAPLES Center. On January 25, 2014 the Kings will host the Ducks at Dodger Stadium as part of the 2014 Coors Light NHL Stadium Series. Fans can visit www.dodgers.com/Kings and use the promotional code KINGS to purchase a $27 ticket in the Coca-Cola All-You-Can-Eat Right Field Pavilion with special access to former Kings players, Kings mascot Bailey and the LA Kings Ice Crew.

The Dodgers will honor employees with 25 or more years of service as part of pre-game ceremonies on the field Tuesday. English tenor Alfie Boe will sing the national anthem.

Tuesday’s Veteran of the Game is U.S. Navy Lieutenant Rusty Hicks of Pasadena. Hicks serves as an Intelligence Officer with the Navy’s Pacific Fleet Command 0194 based in San Diego. He recently returned home from a one-year deployment to Afghanistan where he supported the Combined Joint Special Operations Task Force. Hicks was responsible for providing intelligence support to Army, Navy and Marine Special Task Forces conducting foreign internal defense and village stability operations across Afghanistan. His accolades include the Defense Meritorious Service Medal, Afghanistan Campaign Medal and the NATO Medal.

The Dodgers will pay tribute to first responders on the anniversary of September 11 during pre-game ceremonies. The National 9/11 Flag from the New York Says Thank You Foundation will be unfurled in center field by first responders including two members of FDNY. There will be a joint Los Angeles Police Department, Los Angeles Fire Department, Los Angeles County Fire Department and Los Angeles County Sherriff helicopter flyover. More than 50 first responders and chiefs of respective departments – LAPD, LAFD, County Fire and the Sheriff’s Department – will line up on the first and third base sides during pre-game ceremonies. The national anthem will be performed by U.S. Coast Guard Second Class Petty Officer Michael Dalager. Members of the Los Angeles Police and Los Angeles County Fire Emerald Society Pipes and Drums Band will also perform.  A special flag will be raised on the Top Deck by members of the160th Infantry California National Guard of Inglewood. There will be special vehicles on display from all participating departments in addition to five vehicles provided by non-profit organization Fueled by the Fallen. Each vehicle is a memorial to those who lost their lives on September 11 in the World Trade Center, the Pentagon and aboard all planes.

Miller High Life will host Iraq Afghanistan Veterans of America Day. More than 500 veterans will
receive game tickets, t-shirts and a food and beverage voucher for Wednesday’s game. As part of this event, a select group of veterans will attend Dodgers’ batting practice and 125 veterans will partake in a pre-game recognition in center field prior to the game.

Wednesday’s Veteran of the Game is U.S. Marine Corps Corporal Alex Minsky of Mission Viejo. Minsky served with the 2nd Battalion, 3rd Marines based in Kaneohe, Hawaii.  In 2009, within a few weeks of his deployment to Afghanistan he sustained numerous injuries while the vehicle he was driving in set off an Improvised Explosive Device. Minsky was in a coma for 48 days with a traumatic brain injury and lost one of his leg. Undaunted by the injuries, Minsky retired from the Marine Corps 2010 and has begun a modeling career hoping to inspire others to not quit and not give up on themselves. His accolades include the Purple Heart, Combat Action Ribbon and Operation Enduring Freedom Medal.

Monday’s game is sold out, but tickets for games against the Diamondbacks Tuesday and Wednesday can be purchased by visiting www.dodgers.com/tickets or by calling 866-DODGERS.
Posted by Roberto Baly at 11:30 AM