I guess Dodger fans will be watching the Rose Parade. 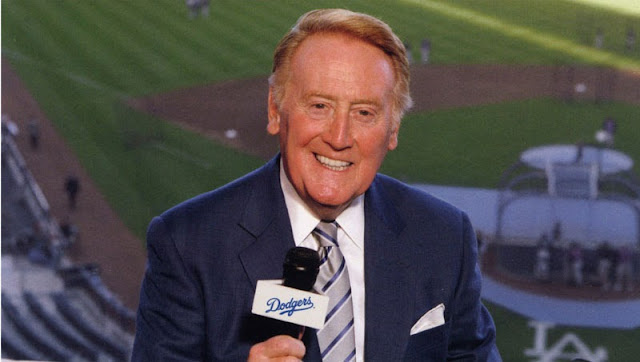 Hall of Fame broadcaster Vin Scully, an icon in American sports history and "the voice of the Los Angeles Dodgers" for 64 years, was announced today as the Grand Marshal for the 2014 Tournament of Roses, themed "Dreams Come True." Scully will ride in the 125th Rose Parade® presented by Honda and toss the coin at the start of the 100th Rose Bowl Game® presented by VIZIO on January 1, 2014, as well as participate in a number of Tournament-related events throughout the month of December 2013.

Tournament of Roses President R. Scott Jenkins made the announcement at a press conference and public event at Tournament House in Pasadena. In his remarks, Jenkins referred to Scully as being in a league of his own and literally the best in his field.

"Vin Scully is incredibly accomplished and yet still so down to earth," said Jenkins. "His own life is one in which many dreams have come true and even more importantly, he has been at the microphone describing for listeners everywhere the dreams of others coming true. I couldn't be happier that he accepted my invitation to be the Grand Marshal. I know his fans everywhere are cheering right now."

"I am deeply humbled and greatly honored to be the Grand Marshal of the 125th Rose Parade," said Scully. "I look forward to sharing this wonderful moment with my wife, Sandi, and the millions who will be watching."

Scully recently announced that he will return to the Dodger broadcast booth for an unprecedented 65th season in 2014. He began his professional baseball broadcasting career in 1950, with the Brooklyn Dodgers. He was inducted into the National Baseball Hall of Fame in 1982. During his unmatched career, he has called three perfect games, 25 no-hitters, 25 World Series and 12 All-Star Games. Iconic moments called by Scully include Kirk Gibson's miraculous Game 1 home run in the 1988 World Series, Dan Larsen's perfect game in the 1956 World Series, Hank Aaron's record-setting 715th home run, Sandy Koufax's four no-hitters (including a perfect game) and the scoreless-inning streaks of Dodgers greats Don Drysdale and Orel Hershiser.

When Scully began broadcasting the Dodgers had yet to win a World Series. Three years later, at the age of 25, he became the youngest person to ever broadcast announce a World Series game. In 1955, he had his most memorable moment behind the microphone, as he called the Dodgers' first and only championship in Brooklyn.

In Los Angeles, Scully has called Dodgers World Championships in 1959, '63, '65, '81 and '88. He was elected the top sportscaster of the 20th century by the non-profit American Sportscasters Association in 2000.
Posted by Roberto Baly at 1:30 PM