The 12th edition of Dodgers Playbill, featuring Dodger closer Kenley Jansen on the cover, makes its debut. A story on Jansen’s dominance, short features on Zack Greinke winning NL Pitcher of the Month for August and Dodger Hall of Fame broadcaster Vin Scully being named the Grand Marshal of the 2014 Rose Parade as well as information on tickets and promotions is also included. Fans receive Dodgers Playbill when they enter through parking gates or by visiting Fan Services stations throughout Dodger Stadium. 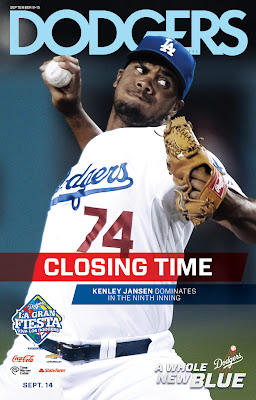