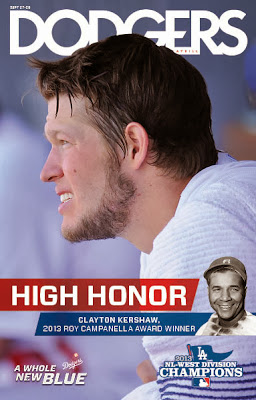 The 13th edition of Dodgers Playbill features the Dodgers’ 2013 Roy Campanella Award winner Clayton Kershaw. The publication includes a retrospective story on Don Newcombe, who won his final start of the 1956 season to clinch the NL pennant for the Dodgers and he later received the MVP and Cy Young Awards for that season. There is also a tribute to Colorado’s Todd Helton, who will retire after playing his final game on Sunday to complete a 17-year MLB career. Fans can also find information on 2014 Dodger Season Tickets and other information when they receive the Dodgers Playbill at all Dodger Stadium parking gates and Fan Services stations.
Posted by Roberto Baly at 7:00 AM