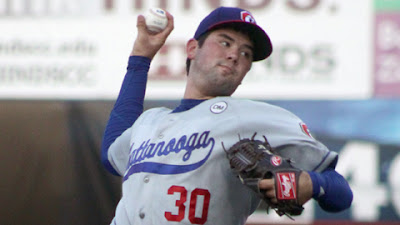 Lee limited opponents to a .247 batting average and finished the season with a 1.17 WHIP, tying for the third-lowest mark in the Southern League. He walked only 35 in 142.2 innings and posted a 3.74 strikeout-to-walk ratio, the third best among league starters with at least 120.0 innings pitched.  He proved to be extra stingy with runners in scoring position, when opponents managed only a .197 batting average (24-for-122), while striking out 40 times.

This was Lee’s third professional season after he was selected with the 28th overall pick in the 2010 First-Year Player Draft out of McKinney (Texas) High School and signed by Dodger scout Calvin Jones.

Schebler led Single-A Rancho Cucamonga with a .296 batting average and ranked among the California League leaders with 27 homers (2nd), 95 runs scored (4th), 13 triples (T-3rd), 91 RBI (7th) and a .581 slugging percentage (2nd) in 125 games. He also stole 16 bases and was one of only two California League hitters to finish the campaign with at least 20 home runs and 15 stolen bases. The left-handed hitter was the only Dodger minor leaguer to hit 20 or more doubles, 10 or more triples and 20 or more home runs in 2013.

Schebler, who turns 23 on Oct. 6, caught fire on June 12, when he started a season-high 18-game hitting streak (ended July 2), and batted .322 (94-for-292) with a league-best 44 extra-base hits, 186 total bases, 21 home runs and 67 RBI in 74 games through the conclusion of the season to earn a selection to the California League’s Postseason All-Star Team. Schebler was honored as the league’s Offensive Player of the Week for the period July 1-7, batting 13-for-29 with eight extra-base hits, including three home runs, and 10 RBI in seven games.

The Iowa native just completed his fourth professional season after being selected in the 26th round of the 2010 First-Year Player Draft out of Des Moines Area Community College and signed by scout Scott Little.

Both Lee and Schebler will be honored in an on-field pregame ceremony prior to Sunday’s 1:10 p.m. Dodger regular-season finale against the Colorado Rockies.
Posted by Roberto Baly at 1:45 PM