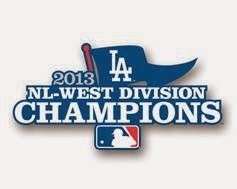 This morning, Dodger playoff tickets for Division Series Games 1 and 2 as well as National League Championship Series Games 1, 2 and 3 sold out in 30 minutes after the ticket On Sale began at 10:00 a.m.  Followers of the Dodgers’ official Twitter handle @Dodgers had the opportunity to purchase tickets from 9:00 a.m. until 10:00 a.m.

There is still limited ticket availability for Game 3 of the Division Series and Game 4 of the NLCS. In addition, fans can still secure guaranteed Postseason rights to all 2013 NLDS and NLCS contests by paying for 2014 season seats in full. To purchase Dodger 2014 season tickets and secure the special benefits included, visit www.dodgers.com/seasontickets. Season ticket pricing starts at just $5 per game.

Yesterday, the Dodgers clinched the 2013 National League West Division Championship, their 12th since the advent of divisional play in 1969 and will play “October Baseball” for the 18th time since moving to Los Angeles and the 27th time in the history of the Dodger franchise.

The Dodgers have gone 58-23 since trailing the D-backs by 9.5 games on June 22, marking the largest deficit that the club has ever overcome to win a division title.

we were able to get our tickets yesterday since we entered a drawing for early purchase! yaaay!

You may post on the professional credentials for the blog owner. You could express it's outstanding. Your blog experience can springboard your click through. Taruhan Bola