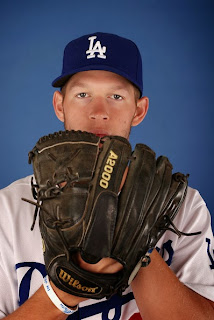 The Los Angeles Dodgers announced today that left-handed pitcher Clayton Kershaw was named the winner of the eighth annual Roy Campanella Award, which is given to the Dodger player who best exemplifies the spirit and leadership of the late Hall of Fame catcher. The award, which was voted upon by Dodger uniform personnel, will be presented to Kershaw by Campanella’s daughter, Joni Campanella Roan, during pregame ceremonies Saturday night prior to the 6:10 p.m. game against the Rockies.

The 25-year-old commenced his third-consecutive All-Star season with a shutout of the Giants on Opening Day, his third consecutive Opening Day start for the Dodgers and, with 16.0 scoreless innings during the season’s opening week, was named the NL’s Pitcher of the Week. Kershaw also won league honors in July, when he was selected as NL Pitcher of the Month with a 4-1 record and a 1.34 ERA (7 ER/47.0 IP) in six starts in the month.

Kershaw has gone 76-46 in his six professional seasons and since making his MLB debut in 2008, he leads the Majors with a 2.61 ERA and a .211 opponents’ batting average. The 2011 NL Cy Young Award winner, who could become just the second Dodger to win the award multiple times (Sandy Koufax, 1963, 1965-66), was originally selected by the Dodgers in the first round (seventh overall) in the 2006 First-Year Player Draft out of Highland Park (Texas) High School.

Kershaw and his wife, Ellen, have also made an impact off the field through their charitable work in Los Angeles and abroad. The couple hosted a charity event this past August, Ping Pong 4 Purpose to raise money for their charity organization, Kershaw’s Challenge, which encourages people to make a difference by giving back to at-risk children and communities in need. The charity has provided assistance to a variety of organizations, including to its cornerstone charity, “Arise Africa,” which helped the Kershaws build and sustain an orphanage for children in Lusaka, Zambia, called “Hope’s Home,” along with the Peacock Foundation in Los Angeles and Mercy Street in their hometown of Dallas, Texas. For his charity work, Kershaw was recognized by Major League Baseball with the 2012 Roberto Clemente Award as the baseball player who best represents the game through positive contributions on and off the field, including sportsmanship and community involvement.

For the fourth consecutive year, the Los Angeles Dodgers Foundation will make a financial contribution to support the Roy and Roxie Campanella Scholarship Program at California State University, Northridge (CSUN), College of Health and Human Development, Department of Physical Therapy. In 2010, the LADF, CSUN and the Campanella family announced a partnership that will ensure the legacy of the Hall of Fame catcher for years to come. In addition to the scholarship program, the partnership also provides an internship opportunity within the Dodgers’ medical department each season for a student from the university’s physical therapy program.

He was inducted into the National Baseball Hall of Fame in 1969 and was among the first three Dodgers to have their uniform numbers retired alongside Robinson and Sandy Koufax. Campanella remained active in the Dodgers’ Community Relations Department until his death on June 26, 1993 at the age of 71.