What's going on at Dodger Stadium for the three game series against the Tampa Bay Rays?

The Dodgers’ sixth annual ThinkCure! Weekend will take place Friday, August 9 through Sunday, August 11. Dodger broadcast partners Dodgers Radio AM570 FOX Sports LA, Univision America KTNQ 1020 AM, PRIME TICKET and KCAL 9, and www.dodgers.com/thinkcure and www.thinkcure.org/weekend, will join in to help promote awareness and raise funds for cancer research during ThinkCure! Weekend. This year’s ThinkCure! Weekend events will include programming on the Dodgers’ broadcast partner stations throughout the weekend, Dodger player, coach and alumni participation,  in-stadium auctions, stories from cancer patients, survivors and their families, in-stadium recognitions and the ThinkCure! logo will be painted on the field. Also during ThinkCure! Weekend, Dodger ushers will be wearing ThinkCure shirts. The ThinkCure! auctions will include Dodger experiences, autographed Dodger memorabilia, gift certificates to Los Angeles area attractions and unique destination experiences.

Fans and ThinkCure! supporters, both in Dodger Stadium and at home, will also be able to participate by texting CURE to 50555 to make a $10 donation through their mobile phone bill or by making contributions online at www.thinkcure.org.

Radio Korea KMPC 1540 AM will broadcast Friday and Saturday’s games against the Rays. FOX national will broadcast Saturday’s game. Postgame Dodgertalk is scheduled to broadcast live from the 3rd Base Prime Ticket Club Saturday starting immediately after the game ends. The show, which offers insight into all the plays, is heard on Dodgers Radio AM 570 Fox Sports LA and features hosts Kevin Kennedy, Dave Vassegh and Jorge Jarrin. ESPN will be at Dodger Stadium for Sunday Night Baseball for the last game of the series against Tampa Bay.

Fans are invited down to the field for Friday Night Fireworks presented by Denny’s immediately following the game. Friday’s fireworks show will be ‘90s themed and feature popular music from that decade.

As part of ThinkCure! weekend, 13 doctors will enter through center field and Dr. Forman of City of Hope and Dr. Siegel of Children’s Hospital Los Angeles will throw the ceremonial first pitch. As part of Strike Out AIDS, a 150-person ribbon will be formed in center field as part of pregame ceremonies.

As part of ThinkCure! weekend, Friday’s game-worn and authenticated jerseys will be auctioned off Saturday and Sunday by the Los Angeles Dodgers Foundation with all proceeds benefitting ThinkCure!

Veteran of the Game is U.S. Marine Corps Corporal Bradley Ivanchan of Arizona. Ivanchan serves with the 1st Battalion, 7th Marines Charlie Company as a Machine Gun Squad Leader. His deployments include Iraq and Southeast Asia.  His deployment in 2012 to the Sangin District in Afghanistan was life-changing. While on night patrol, Ivanchan stepped on an Improvised Explosive Device and lost both of his legs as result of the blast. Ivanchan did not let the loss of his legs deter him as 9 months following his injuries his was the first double amputee to climb the summit of Aconcagua in Mendoza, Argentina as part of the Heroes Project. His accolades include a Purple Heart and the Global War on Terrorism Medal. 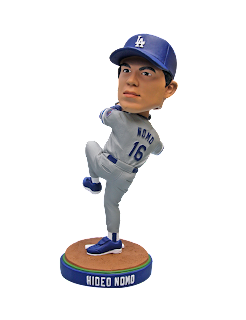 Nomo will be on hand Saturday to throw the ceremonial first pitch on his bobblehead day (1:05 p.m. vs. TB). This marks Nomo’s first public appearance at Dodger Stadium since retiring from baseball in 2008.

Nomo’s first pitch is scheduled for approximately 1:00 p.m. The Dodgers will feature a video tribute prior to this on Dodger Vision.

Saturday’s Veteran of the Game is U.S. Air Force Sergeant Randy Swaydon, a Los Angeles native. Swaydon served with the 306th Bomb Wing, 7th Air Force as a Radio Operator and War Ready Material Specialist. He served at McCoy Air Force Base, was deployed to Tan Son Nhut Vietnam and honorably discharged in 1971 from the Air Force. In 2003, Swaydon was diagnosed with Esophageal Cancer and underwent numerous lifesaving radiation and chemotherapy treatments at City of Hope and is now cancer free. Swaydon’s accolades include the National Defense Ribbon and the Vietnam Service Ribbon. 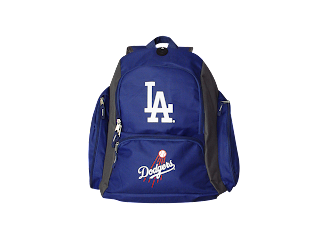 The first 15,000 ticketed kids 14 and under in attendance will receive a Kids Back to School Backpack presented by First 5 LA. Due to Sunday’s game time, Kids Run the Bases will not take place postgame.

It’s also Viva Los Dodgers presented by Chevrolet, State Farm and Time Warner Cable Sunday. The pregame family-friendly festival begins at 3:05 p.m. in Lot 6. Fans are encouraged to arrive early as Ricky Nolasco will make his first appearance at Viva Los Dodgers and sign autographs for fans for a half hour.

Entertainment will include Domino Saints, a duo from San Juan, Puerto Rico whose unique sound incorporates elements of salsa, urban, pop and electronic beats and Salvador Santana, the son of rock legend Carlos Santana, who is a keyboardist, vocalist, composer and songwriter. Santana will also sing the national anthem. Pepe Aguilar, 8-time GRAMMY award-winner and Latin GRAMMY winner who has a new single “Lastima Que Seas Ajena'” will throw the ceremonial first pitch on Viva Los Dodgers Day. Aguilar has two upcoming concert dates at the Gibson Amphitheatre on September 5 and 6.

Adrian Gonzalez’s Viva Los Dodgers will host families from Barrio Action, an organization that was established to empower young people in Northeast Los Angeles to succeed both academically and socially, with a special emphasis on helping high-risk and at-risk youth, young adults and their families. Barrio Action’s programs focus on education; youth and family counseling; fitness and nutrition; and community engagement and empowerment.

At each Viva Los Dodgers, the Dodgers recognize outstanding leadership and service in the Latino and greater Los Angeles community with the “Heroe de la Comunidad” award. This Sunday’s recipient is Tammy Membreno, Executive Director of Barrio Action.

As part of family-friendly entertainment at Dodger Stadium on Sundays, the Dodgers offer additional musical entertainment in the Reserve level plazas located on the first and third base sides. The right Reserve Plaza will feature live music from LA indie rock band Badflower. The left Reserve Plaza will feature a performance by steel drum band Rusty Steel.

There will be two honorary first pitches as part of ThinkCure! weekend. Sean Kent, a City of Hope patient that is celebrating his 10th year of being cancer free, will throw one. Kent is a standup comedian who can also be seen on the new A&E reality show “Modern Dads” which debuts August 21. Ben Teller, also a City of Hope patient, will throw an honorary first pitch. Teller works for FOX Sports behind-the-scenes.

Sunday marks the Dodgers’ 5th annual Cheer Night at Dodger Stadium where the club recognizes the spirit, passion and enthusiasm of Southern California’s best cheer teams. Prior to the game, 26 teams from throughout Southern California will perform on the field.

Sunday’s Veteran of the Game is U.S. Navy Hospital Corpsman Jeffrey Bartom of Huntington, Indiana. Bartrom is also a Dental Technician and is currently assigned to the Naval Hospital at Camp Pendleton where he is responsible for maintaining the health of over 800 wounded warriors and 2,000 active duty Naval personnel. He served deployments to South Korea, Kuwait and Iraq. Bartom’s accolades include the Navy Achievement Medal, Iraq Campaign Medal and Korea Defense Medal.

Tickets for games on Friday and Sunday against Tampa Bay can be purchased by visiting www.dodgers.com/tickets or by calling 866-DODGERS.
Posted by Roberto Baly at 12:30 PM