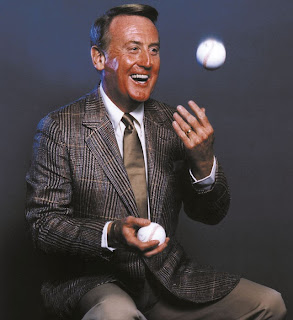 Hall of Fame broadcaster Vin Scully, an icon in American sports history, will return to the Dodger broadcast booth for an unprecedented 65th season in 2014, it was announced. Scully will again call all Dodger home games and road games in California and Arizona.

“I have thoroughly enjoyed the excitement of this season and there is no way I could leave this truly remarkable team and our great fans,” Scully said.  “With my wife Sandi’s blessing, I’ve decided I’d like to come back and do it again next season.  I love what the new ownership has brought to the team, and the energy provided by the fans, who have packed renovated Dodger Stadium.  It reminds me that other than being home with my family, there is no place else I’d rather be.”

Widely regarded as the finest sportscaster of all time, Scully’s 64 years of service mark the longest tenure in his field. He will call all nine innings of the team's television broadcasts on Time Warner SportsNet LA beginning in 2014, with the first three innings of each of his games also simulcast on AM 570 Fox Sports LA.

“The Dodgers are overjoyed to have Vin back with the team in 2014,” said Dodger Chairman and Owner Mark Walter. “Vin IS Dodger baseball. The Dodgers, the sport of baseball and the city of Los Angeles are extremely fortunate to have him in our midst.”

“We’re so grateful that Vin wants to continue to call Dodger games,” said Dodger owner Earvin Johnson, “Being able to listen to Vin helps make every Dodger game something special.”

“Vin brings a unique perspective to Dodger baseball,” said Dodger President and CEO Stan Kasten. “Everyone in the Dodger family and within the sound of his voice benefits each and every time we are afforded the opportunity to hear him call a Dodger game. We are thrilled to know that experience will continue through at least the 2014 season.”

Scully began his professional baseball broadcasting career in 1950 with the Brooklyn Dodgers. He was inducted into the National Baseball Hall of Fame in 1982. During his unmatched career, he has called three perfect games, 25 no-hitters, 25 World Series and 12 All-Star Games. Iconic moments called by Scully include Kirk Gibson’s miraculous Game 1 homer in the 1988 World Series, Don Larsen’s perfect game in the 1956 World Series, Hank Aaron’s record-setting 715th home run, Sandy Koufax’s four no-hitters, including a perfect game, and the scoreless-inning streaks of Dodger greats Don Drysdale and Orel Hershiser.

When Scully began broadcasting, the Dodgers had yet to win a World Series. Three years later, at the age of 25, he became the youngest person to ever broadcast a World Series game. In 1955, he had his most memorable moment behind the microphone, as he called the Dodgers' first and only championship in Brooklyn.

In Los Angeles, Scully has called Dodgers World Championships in 1959, ’63, ’65, ’81 and ’88 and he was elected the top sportscaster of the 20th century by the non-profit American Sportscasters Association.
Posted by Roberto Baly at 9:30 AM