Everyone says that Yasiel Puig yelled "Fuck the media". But did he really? Translate this....

Jose Fernandez and Yasiel Puig meet for the first time before the game. 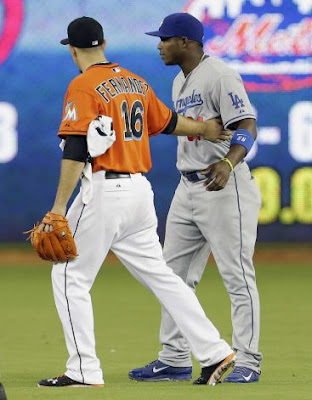 Tony Jackson has video of it. {linked here}

Puig spoke for about 20 minutes and after the press conference ended, the media heard him yell something in Spanish out loud while leaving.

One reporter translated what he said to this... {linked here}

Yasiel Puig was in the visitors clubhouse here at #Marlins Park & looked at us gathered there and yelled, "F**K the media" and left the room


How does this reporter know he meant to say "Fuck the media"? If you read his tweets after that it's because he claims he asked another reporter that speaks in Spanish and that's what he told him.

Deadspin picked that up and every big sports blog ran with it as if it's the truth. {linked here}

After reading a few Miami blogs/newspapers in Spanish, I was able to find out exactly what Puig said.

That does not mean "Fuck the media". Pinga is a Cuban slang word that means the private part of a male. But Pinga can mean so many things.

The word pinga can be something bad or good. Same thing with the word "Coño".

So there you go. This is my free Cuban class for you today.

Is Puig not immature enough? Maybe but he's 22 years old. One year ago he had nothing. NOTHING. He was in Cuba with nothing. Puig getting new shoes is big news for him. Puig posting non-stop in Instagram is fun for him. I'm sure Puig will learn and mature as the time passes. I must admit the other Cuban Jose Fernandez is more mature than Puig. But it is unfair to compare the two. Everyone is different.

Unfortunately  in my opinion I see there is a negative reaction towards Puig among the national writers non-Dodger fans. They see Puig playing hard and they think he's an arrogant guy. This is the only way Puig can play.

Yes, there might be some areas where he can improve but I would pick Puig to play everyday over any of his teammates.

I think Puig is still going through a kind of culture shock... like you said, he was in Cuba just over a year ago... Fernandez, on the other hand, defected in 2008. He's had much more time to adjust to Western culture, and has 2 years of minor league ball to help him along with the cultural differences.

If your father use to say that word around you everyday that tells me alot.

Growing up in a Cuban household, I never heard that word. It was not until I started playing ball with a bunch of "Marielitos" in La Liga del Trapo, that I heard that word, and the very first time I said it in the presence of my mother, I was backhanded quicker than the speed of light.

"Pinga" is not like Co~no. See Alvarez Guedes for all things Co~no.

Pinga is one of the most vulgar words in the Cuban dialect.

Whether it be "Marielitos", or "Balseros", for some reason, like many things now in Cuba, this word has become more accepted, and in their eyes viewed to be not as vulgar as say my parents generation. Than again, what exists now in Cuba is not the same culture, or dialect, that use to exist before Castro destroyed things. Another brilliant accomplishment by Castro and his revolution. Like many photos you see today of Cuba, the island is in shambles, and a mere speck of what it once was. This not only goes for it's infrastructure, but the culture as well.

What Puig said basically means go fuck yourself. Like many phrases, whether it be Cuban, or some other culture, the literal translation often isn't what is actually being said.

If Puig did in fact say this than he is a tremendo comePUInGa!

You must have been raised in a religious household or your family is just a very sensitive family. That word is not a big deal. I have no idea what you're talking about. And my dad is not a "Marielito" or "Balsero". He came here in 1962.

but good work on the page keep it going roberto

who care what puig, said this is called freedom of speech in america,if thats how he feels then so be it,now go out and play ball and have a great rest of the year lets cocentrate on winning and not on negative ,he said she said things,go dodgers come on haters!!!!!

Wrong again... I didn't grow up in a religious, or sensitive household. I'm proud to say I grew up in a very respectful, very Cuban household, full of loud boisterous family gatherings accompanied by lechon asado, black beans, and salsa music.
And in between spending summers in Miami with family, or attending Cuban functions at the Jose Marti, Glendale, or Manzanillero Clubs here in LA, I learned real quick that PINGA is as vulgar of a word as their is in my culture.

It may be ok for the bar, ball field, or between the fellas, but not for normal conversation.

I shouldve have been more specific. People who use that word regularly are chusmas! Not specifically "Marielitos" and/or "Balseros". I know many folks who came to this country through both medians, and they're not chusmas.

The real problem here is Puig and his attitude. He's a cabezon and a malcriado. He needs to put away the attitude and start growing up. He needs to remember that he could still be in Cuba cutting sugar cane and comiendose un cable.

KidCuba - I'm not wrong. Your family is just different. Don't get all uptight about something dumb. Life is short. Take care.