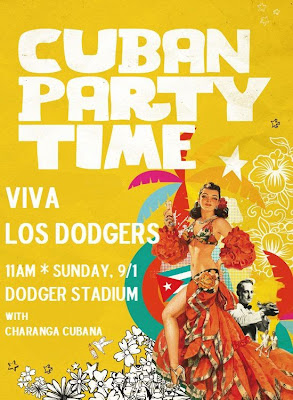 Sunday is Cuban Heritage Day at Dodger Stadium. (1:10 p.m. vs. SD). As part of this cultural celebration, Dodger outfielder Yasiel Puig and reliever Paco Rodriguez will make a special appearance at Viva Los Dodgers presented by Chevrolet, State Farm and Time Warner Cable. Auto gates open early at 10:45 a.m. and fans are encouraged to arrive to lot 6 early. Both players are scheduled to attend at 11:00 a.m. Rodriguez will sign autographs for fans and Puig will be on stage to greet fans and partake in a Q&A session with fans. Legendary Dodger scout and native Cuban Mike Brito will also be on hand. Player appearance time subject to change.

Paco Rodriguez, a Cuban-American LHP born in Miami, became the first player to be called up from the 2012 First-Year Player Draft out of the University of Florida. Three months after being drafted in the second round, Rodriguez made his Major League debut. Since his call up, Rodriguez has become a dominant force out of the Dodger bullpen posting a 3-2 record with two saves and a 1.91 ERA. This season, Rodriguez ranks second among NL relievers with a .143 opponents’ batting average and ranks first in WHIP among NL relievers with a 0.74 mark (2nd, MLB).

Since breaking into the Majors on June 3, Yasiel Puig, a native of Cienfuegos, Cuba, has been the most exciting and talented rookie in baseball. In 2013, Puig is hitting .346 with 13 HR and 30 RBI in just 74 games. The outfielder became the first player in Major League history to capture Player of the Month honors in his first calendar month and according to Elias Sports Bureau, Puig is the first player since Joe DiMaggio in 1936 to have 70+ hits (71) and 10 HR in his first 50 Major League games.

At each Viva Los Dodgers, the Dodgers recognize outstanding leadership and service in the Latino and greater Los Angeles community with the “Heroe de la Comunidad” award. This Sunday’s recipient is Dr. Tirso del Junco, a prominent diplomat, retired surgeon, community leader and native of Havana, Cuba. This Sunday’s award will be presented by Dodger Hall of Fame Spanish-language broadcaster Jaime Jarrín.

On Cuban Heritage Day, Levy Restaurants will offer a special extreme loaded dog, the Cuban Dog, an all-beef hot dog with carnitas, ham, Swiss cheese, pickles and yellow mustard and it will be available at extreme loaded dog concession stands throughout the stadium.

The national anthem will be performed by legendary Cuban musician Arturo Sandoval. Sandoval is a 9-time GRAMMY award winner and was recently awarded the Presidential Medal of Freedom by President Obama.

Limited tickets for Cuban Heritage Day on September 1 can be purchased at www.dodgers.com/cuba using the promotional code: 13CUBA.

Wow no Benny The Jet Rodriguez??? He should be there and he is also Cuban so it will make more sense.