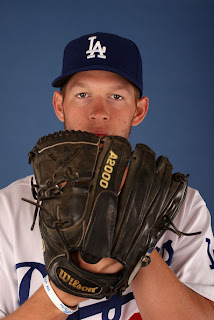 Major League Baseball announced today that Clayton Kershaw has been voted National League Pitcher of the Month for the month of July.

Kershaw went 4-1 in six July starts and led the National League with a 1.34 ERA, allowing only seven earned runs in his League-best 47.0 innings of work. The hard-throwing lefty tied for the most wins while holding opposing hitters to a .161 batting average, the third-lowest mark in the N.L. Kershaw notched 43 strikeouts for the month, tied for the third-most in the Senior Circuit, while issuing just two walks.

On July 2, Kershaw notched his second complete game shutout of the 2013 season, blanking the Colorado Rockies over 9.0 innings of work in an 8-0 win at Coors Field. The Texas native allowed just four hits in the outing while fanning eight and not issuing a free pass. It was his first shutout performance since blanking the San Francisco Giants on Opening Day (April 1), and it was his third complete game effort this year (also May 20 at Milwaukee). On July 7, Kershaw continued his mastery of the division-rival Giants, allowing just one run in 8.0 innings of work to earn his third win against the defending World Series Champs in four starts this season. The Dodger ace has gone at least 7.0 innings while allowing two runs-or-fewer in each of his starts this year against San Francisco. Kershaw was pegged with a loss in his following outing, dropping a 3-0 decision on July 12th to the visiting Rockies despite delivering a quality start. The three-time N.L. All-Star returned from the 2013 Midsummer Classic in top form, allowing just two runs on two hits (a pair of solo home runs) with nine strikeouts in 7.0 innings of work in a 9-6 win at Washington on July 21. On July 26, Kershaw notched his 10th victory of the season, improving his record to 10-6 as his N.L. West-leading Dodgers edged the Cincinnati Reds, 2-1. Kershaw did not factor in the decision of his July 31 start against the visiting New York Yankees despite tossing 8.0 shutout innings in his league-best 19th quality start. With the impressive month, Kershaw improved his Major League-leading ERA to 1.87 for the season and his 161 strikeouts are the second-most in the National League. This is his second career Pitcher of the Month Award, having won previously for the month of July 2011 during his Cy Young Award-winning campaign.

The National League Pitcher of the Month for July 2013, Clayton Kershaw, will receive a specially designed trophy, suitably engraved, to commemorate his performance.
Posted by Roberto Baly at 3:00 PM