What's going on at Dodger Stadium for the four game series against the Cincinnati Reds?

It's Vin Scully bobblehead night presented by Bank of America. Auto and stadium gates open early at 5:10 p.m. tomorrow. The game is sold out. The first 50,000 fans in attendance will receive a “retro style” bobblehead of the Dodgers’ Hall of Fame broadcaster. Scully has been with the Dodgers for 64 seasons, the longest tenure of any broadcaster with one sports team in professional sports history. He was inducted into the National Radio Hall of Fame in 1995, the NAB Broadcasting Hall of Fame in 2009 and has been named National Sportscaster of the Year three times. This marks the Hall of Famer’s second Dodger Stadium bobblehead.


The national anthem tomorrow will be performed by Jared Axen, a nurse who sings to his patients at Henry Mayo Memorial Hospital in Valencia. In a recent NBC Nightly News piece, Axen discussed how it is his dream to sing the national anthem at Dodger Stadium.

LA Galaxy players Gyasi Zardes and Jose Villareal will be on hand to participate in a pregame interview about the upcoming Guinness International Champions Cup doubleheader at Dodger Stadium on Saturday, August 3. For more information on the Guinness International Champions Cup, please call the Galaxy at 877-3GALAXY (342-5299) or visit www.lagalaxy.com/ICC or the tournament’s official website at www.internationalchampionscup.com.

Tonight's Veteran of the Game is U.S. Army Master Sergeant Michael Jones from Bunnell, FL. Jones is trained as an infantryman whose responsibilities are to help defend our country against any threat by land and aiding in the mobilization of vehicles, troops and weaponry. Jones has served at various locations throughout the country and was deployed in support of Operation Desert Storm in 1990. Jones currently works with inner-city students at Miami Jackson High School’s JROTC Leadership Education Training program. His accolades include the Bronze Star, the Army Commendation Medal with two Oak Leaf Clusters and the Kuwait Liberation Medal.

The City of Gardena will host their annual Dodger Night and 1,000 fans from Gardena will be seated in the All-You-Can-Eat right field pavilion.

Fans are invited down to the field for Friday Night Fireworks presented by Denny’s immediately following the game. Friday’s fireworks show will be ‘80s themed and feature popular music from that decade.

More than 1,100 members of the United Methodist Church will be celebrating the 31st Dodger night and will be seated in the Infield Reserve section tomorrow.

You Tube personality Jenna Marbles will throw an honorary first pitch. Marbles recently became the third You Tube creator ever to reach 10 million subscribers. Her videos have more than 1 billion views.

“Breaking Bad” star and Emmy award winner Bryan Cranston will throw the ceremonial first pitch. Zendaya, Disney Channel “Shake It Up” star and “Dancing with the Stars” contestant, will sing the national anthem.

The first 100 Hondas entering Gate A starting at 6:00 p.m. on Friday will receive free parking courtesy of Southern California Honda.

Friday’s Veteran of the Game is U.S. Army Sergeant First Class Jose Flores of Los Angeles. Flores has been stationed at numerous locations throughout the country and on several deployments including Thailand, Egypt and two tours each to Iraq and Afghanistan. Flores currently serves with the HHT 1ST Squadron, 4th Cavalry Regiment based out of Fort Riley, KS. His accolades include a Bronze Star, two Afghanistan Campaign Medals and a Global War on Terrorism Medal.

The California Youth Spirit Corps (CYSC) cheerleaders will perform prior to Saturday’s game in center field. More than 600 cheerleaders will be on hand for this special performance and more than 3,000 fans will attend this group night.

Saturday’s Veteran of the Game is U.S. Army National Guard Sergeant Brenda Kister of La Mirada. Sergeant Kister enlisted in 2004 and was deployed to Afghanistan in 2007 serving there for one year. Kister’s military specialty was Military Intelligence responsible for preparing, assessing and verifying the reliability of all sources of incoming information to support the combat commander. She currently works with the California Department of Health Care Services. Kister’s accolades include the Army Commendation Medal, Afghanistan Campaign Medal and the Global War on Terrorism Service Medal. 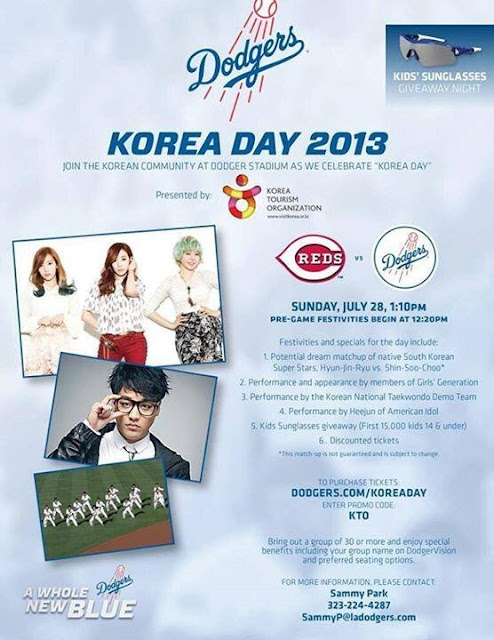 It is Korea Day presented by Korea Tourism Organization (KTO). The first 15,000 ticketed kids 14 and under in attendance will receive Kids’ Sunglasses presented by KTO.

Sunday’s pre-game celebrations will include performances by members of the Korean mega-group Girls’ Generation.  Tiffany, Taeyeon, and Sunny of Girls’ Generation will perform and throw the ceremonial first pitch. The National Korean Taekwondo Team will return to partake in pregame ceremonies. “American Idol” 2012 finalist Heejun will sing “God Bless America.” Following the game, KTO will host a ceremony at the Dodgers Public Relations Media Room to honor Hyun-Jin Ryu and Girls’ Generation as honorary ambassadors of Korean Tourism. Tickets for this event can be purchased by visiting www.dodgers.com/koreaday.

The LA Galaxy will be on hand with their MLS Cup championship trophies for fans to take photos in promotion of the upcoming Guinness International Champions Cup doubleheader at Dodger Stadium on Saturday, August 3. For more information on the Guinness International Champions Cup, please call the Galaxy at 877-3GALAXY (342-5299) or visit www.lagalaxy.com/ICC or the tournament’s official website at www.internationalchampionscup.com.

Adrian Gonzalez’s Viva Los Dodgers will host families from The Mothers of East LA, an organization made up of mothers and allies dedicated to creating a more stable quality of life through environmental protection and community development for families throughout Los Angeles’ Eastside.

At each Viva Los Dodgers, the Dodgers recognize outstanding leadership and service in the Latino and greater Los Angeles community with the “Heroe de la Comunidad” award. This Sunday’s recipient is Carlos Vaquerano, Executive Director – Salvadoran American Leadership & Educational Fund (SALEF). SALEF’s mission is to promote the civic participation and representation of the Salvadoran and other Latino communities in the U.S.

As part of family-friendly entertainment at Dodger Stadium on Sundays, the Dodgers offer additional musical entertainment in the Reserve level plazas located on the first and third base sides. The right Reserve Plaza will feature live Jazz music from Mojo Soul Band. The left Reserve Plaza will feature a performance by Naia Kete of “The Voice” season two.

Sunday’s Veteran of the Game is U.S. Navy Lieutenant Susan Ahn Cuddy of Los Angeles. Cuddy enlisted in 1942 to defend the United States after the attack on Pearl Harbor. She was stationed across the country serving as a WAVES (Women Accepted for Volunteer Emergency Service) Link Instructor training Naval Pilots in Air Combat and Gunnery tactics. Cuddy worked with U.S. Navy Intelligence and become the Division Director for the National Security Agency. She worked on many top secret projects for the Department of Defense and other agencies during her service with the United States Government. Her accolades include the 2003 Women of the Year from the California State Assembly and the American Courage Award from the Asian American Justice Center in Washington, DC.

Following the game, 125 fans that purchased a ticket for Carne Asada Sunday presented by Chef Merito will attend a cookout with Andre Ethier and enjoy authentic Mexican Carne Asada presented by Chef Merito, the official seasoning of the Los Angeles Dodgers. Fans will also get the opportunity to partake in a Q&A session with Andre Ethier as well as an opportunity to take pictures with the All-Star in the Loge Terrace from the conclusion of the game to two hours post-game. The event benefitting the Union Rescue Mission, Ethier’s charity of choice, is sold out.

Tickets for games on Friday and Sunday against Cincinnati can be purchased by visiting www.dodgers.com/tickets or by calling 866-DODGERS.