Jay-Z after Yasiel Puig? And Media & Miguel Montero not happy with Puig

First of all you need to keep voting for Yasiel Puig. He's still in second place.

The media thinks Puig is not talking enough. Seriously, who cares? I don't care. I just want him to contribute to the team. And I don't really understand the controversy since I've heard him speak with reporters often. I'm always posting links to his interviews. They want him to talk every single day?

"He's doing the best he can," Mattingly said of Puig, who has refused virtually all interview requests, will not make himself available before games and is available after games only occasionally. "It's been a big adjustment for him. It's a lot for him to handle.

"He wants to make sure his concentration is on baseball, and for us, it's the right thing to keep his priorities in line. In a way, there are certain things that come with it, at least the bare minimum, he'll talk after games."

Mattingly said Puig should be given some slack because he's 22 "with the world on a string."

I have noticed that he does speak to reporters that speak Spanish more often. He did one after Sundays game in San Francico for ESPN Deportes. I don't get what the big fuss is. Understand that he does not speak English and might feel weird to do all these interviews.

Media is not happy with Puig and Arizona Diamondbacks catcher Miguel Montero is also upset with Puig.

Did you understand what he said? If not, read this -

"if he's my teammate probably trying to help him not be hated in the major leagues."

"that's where he's going right now, creating a bad reputation throughout the league."

"Does he have talent? Of course. It'd be really bad if he wasted it doing the stupid things he's doing."

How about if Miguel Montero worries about himself? What a joke.

Let's move on to Tim Bravo, the man that follow Puig's every step. He's like a life mentor and also translates for Puig. 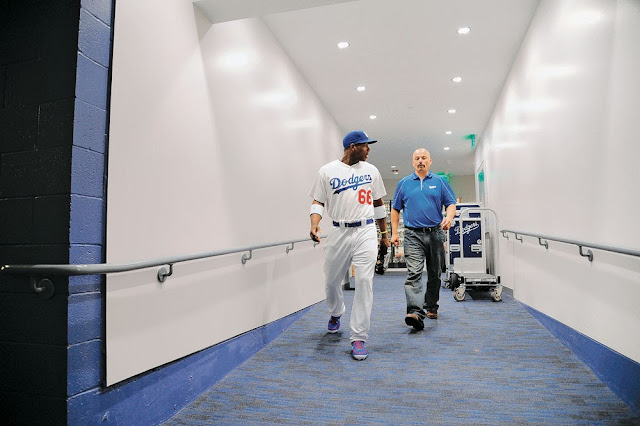 From Bill Plaschke of the L.A. Times {linked here}

The 51-year-old schoolteacher watches the 22-year-old phenom from his morning steak-and-eggs breakfast to his midnight walks with his two English bulldogs.

Bravo lives with Puig, drives with him, hangs out with him in the clubhouse before games, then watches him play from darkened tunnels next to the dugout.

Bravo is there to make sure Puig doesn't drive too fast, or party too hard, or forget how to use his ATM card to withdraw some of his new major league millions. He is there to protect Puig from nutty autograph seekers, aggressive groupies and anyone else wanting to take advantage of an unsettled Cuban refugee who lives as hard as he swings.

Bravo originally signed up to be his English tutor, but he has become his life tutor, this compact man with a shiny bald head and dark goatee becoming so vital to Puig's comfort and safety that the outfielder refers to him not by his name, but his job.

"Teacher!" he shouts to Bravo in English when he needs him. "Teacher!"

That's nice. I'm glad Puig has someone with him to teach him how life works here. But this is the part I don't understand.

By taking on Puig's life, Bravo has given up much of his own. He is a special education teacher at Las Cruces (N.M.) High. He has six children and six grandchildren. His 7-year-old son, Zechariah, is recovering from a rare form of cancer that was discovered under an eyelid.

Bravo will leave the Dodgers for a week after the All-Star break to accompany Zechariah on a Make-a-Wish trip to Disney World. It will be his longest absence from the team since he joined Puig at double-A Chattanooga this season.


"I'm just a normal dude with a regular job who was doing some work for the Dodgers on the side," he said. "But then the minute Puig was signed, they asked me to drop everything."
And so he has done exactly that, for minimal pay and little fame, unless you count the time some of his family members saw a glimpse of head in that dugout hallway during a televised game.
Minimal pay? Are the Dodgers paying the kid's medical bills?

And I was also wondering what happened to Eddie Oropesa? The former pitcher (who happens to be Cuban too) was the one that was suppose to help Puig. 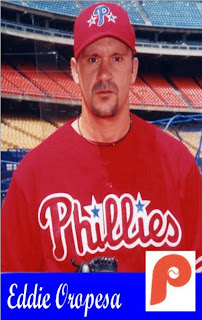 How important is Bravo's success as a father figure so far? When he is gone next week, the Dodgers will replace him with the first guy who tried to do the job. The interim caretaker will be Eddie Oropesa, a former big league pitcher who was chronicled in this column during spring training. Oropesa, however, barely lasted a month with Puig, as he became frustrated with the stubborn and hard-living kid before taking a break to tend to personal business.

Wait, two Cubans didn't get along with each other? I'M SHOCKED!

Hold on, a story has been posted. Puig has talked with another reporter. You see, he does speak with the media.

"In Cuba, there wasn't much press. Here, I have a lot of press on me, and it's not something I really like. Maybe they don't understand the situation I'm in," Puig said. "I'm not bad, I just don't like the press and I don't like the fame. I'm having fun and I want my team to get the attention. There are a lot of guys in the bullpen or in the dugout waiting for their turn to talk. It's not that I don't want to give an interview, I just don't want all the press all over me."

So the media needs to relax. No big deal. 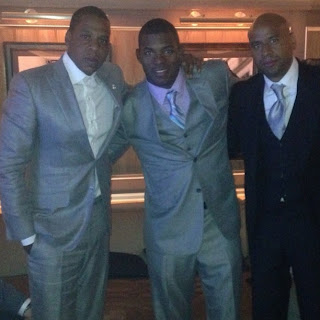 During a mid-June trip to New York, Puig was invited to a party at a club Jay-Z owns after a Dodgers teammate passed along the rapper's contact information, one source said. Between the lifestyle and marketing plan offered by Roc Nation Sports, Puig left the meeting intrigued.

Montero really comes across as a frustrated player jealous of a young guy's raw and natural talents. I agree that Puig's reluctance to talk to the media is not a big deal. HE'S 22 YEARS OLD!!! I do think Yasiel has a lot to learn, but a lot of the Puig critics just sound jealous and petty right now. Just let this kid play, afterall it is a game.

Odd how Puig has shown nothing but respect to everyone expect for the pitcher who mocked his fellow teammate and friend for no reason whatsoever, and to the team that threw a baseball at his face then tried hurting another teammate.

Agree Montero sounds like a teenage girl with a inferiorty complex. Bad reputation throughout the league? I seriously doubt Toronto Blue Jays players spend any time in the locker room talking about how Puig is a prick. Maybe Montero should spend more time telling his own fellow teammates and coaching staff not to be cowards and try to beat Dodgers players through good play instead of trying to injure them. The rest of the league can see that too.