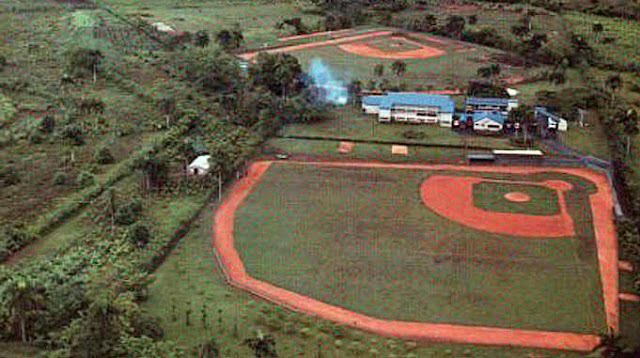 Yesterday morning was crazy. News broke out that the Dodgers signed Cuban infielder Alexander Guerrero to a 7 year contract worth around $32 million. Hours later it was reported Guerrero hasn't signed a contract and hasn't even been cleared from OFAC. {linked here}

While searching for Guerrero news, I listened to a Dominican sports station, Grandes en los Deportes, and heard that Stan Kasten is at the Dodgers baseball academy, Campo Las Palmas. I thought maybe he was there because Guerrero is currently living in the island. Apparently not. Kasten held a press conference to announce new plans to remodel Campo Las Palmas.

Kasten says he wants the Dodgers to spend money in the D.R. again.

In the past we were the leaders here and in the past year, we have fallen behind here, but that's going change

On signing Hanley Ramirez to an extension...

We are very happy with Hanley Ramirez what he has done since he came here and we know that he's very happy to be with the Dodgers. The possibility of an extension will be in the off-season.

Kasten didn't say anything about Alexander Guerrero but the AP story says that the Dodgers Vice President of international scouting, Bob Engle was there.

Guerrero is scheduled to meet with teams today and tomorrow.

Jesse Sanchez of MLB.com just sent me this via Twitter....

#Cuba INF Alexander Guerrero is having a showcase today & playing a game tomorrow, @rbaly79. At #Dodgers complex in the DR.