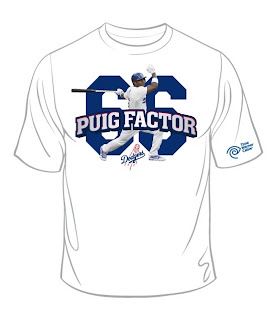 The Dodgers announced today that in celebration of outfielder Yasiel Puig’s National League Player of the Month Award, the club will offer fans the chance to purchase four tickets to the Dodgers-Rockies game on July 14 in the Preferred Loge Box, Reserve MVP or Infield Reserve sections for just $66. The sale will kick off at approximately 2:24 p.m. PT during the Dodger game on Sunday afternoon and conclude 66 minutes later, at 3:30 p.m. PT.

The ticket discount will allow fans the chance to see Puig and the surging Dodgers play the Rockies at 1:10 pm on July 14. On that day, the first 40,000 fans in attendance will receive a Yasiel Puig, “Puig Factor” t-shirt, presented by Time Warner Cable.

To celebrate No. 66 with your purchase during the sale this Sunday, visit dodgers.com/66puig or losdodgers.com and then enter the promo code: 66PUIG. Remember that the offer expires at 3:30 p.m. PT during the Dodgers-Giants game.

This one-time offer represents a savings of more than 40 percent on the Preferred Loge Box and Reserve MVP sections, while providing a discount of almost 20 percent for the Infield Reserve. Tickets may be purchased at any quantity (up to 29 tickets) for the discounted price of $16.50 per ticket, while supplies last. All tickets are subject to availability.

In 26 games last month, his first in the big leagues, Puig led the Majors with a .436 (44-for-101) batting average, 44 hits and a .713 slugging percentage. The Cuba native ranked among N.L. leaders with a .467 on-base percentage (1st), 72 total bases (2nd), 19 runs scored (T-3rd) and seven home runs (T-5th). Puig’s 44 hits ranked as the second-most all-time for a player in their debut calendar month, behind Hall of Famer Joe DiMaggio’s 48 hits in May 1936. Puig also joined DiMaggio as the only players in Major League history to record at least 40 hits while hitting at least four home runs in their first month in the Majors.
Posted by Roberto Baly at 4:15 PM