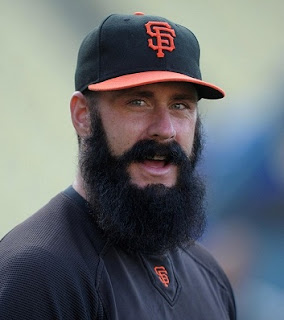 Wilson, 31, has gone 20-20 with 171 saves in 315 career games with the Giants from 2006-12. The New Hampshire native has limited opposing hitters to a .238 batting average during the course of his career with 340 strikeouts in 320.0 innings. Wilson has also historically been a second-half pitcher with a 2.69 ERA in 149 career appearances after the All-Star break and pitched well in the postseason during the Giants’ 2010 World Series run, striking out 16 in 11.2 scoreless innings in postseason play.

Wilson last pitched in the Majors on April 12, 2012 and underwent Tommy John surgery later that month on his right elbow.

Wilson was originally selected by the Giants in the 24th round of the 2003 First-Year Player Draft out of Louisiana State University.

The Dodgers now have 39 players on their 40-man roster.
Posted by Roberto Baly at 3:50 PM