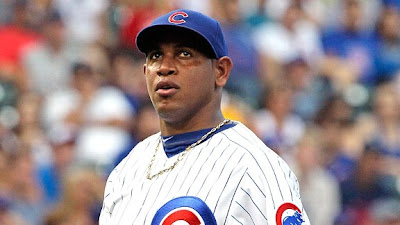 The Dodgers have changed Dominguez from optioned to the 15-day disabled list with a left quad strain.

The Los Angeles Dodgers today selected the contract of right-handed reliever Carlos Marmol from Double-A Chattanooga and optioned right-hander Jose Dominguez to Triple-A Albuquerque. Marmol, 30, was acquired along with cash considerations from the Chicago Cubs on July 2 in exchange for right-hander Matt Guerrier. The Dodgers also acquired international signing bonus slot No. 92 valued at $209,700 from the Cubs as part of the deal.

Marmol, who will wear No. 49, has made five minor league appearances (0-0, one save, 3.60 ERA) since being acquired by Los Angeles, allowing two runs in three appearances with Single-A Rancho Cucamonga (3.0 IP) before being promoted to Double-A Chattanooga on July 18, where he tossed 2.0 hitless, scoreless innings. The native of the Dominican Republic last pitched on Sunday, striking out one and throwing 17 pitches (nine strikes) in a scoreless frame at Birmingham (White Sox).

Dominguez posted a 2.16 ERA in 8.1 innings in nine relief appearances with Los Angeles in his first big league experience. Dominguez, 22, had his contract selected from Triple-A Albuquerque on June 29.

The Dodgers now have 39 players on their 40-man roster.