Carl Crawford is back! 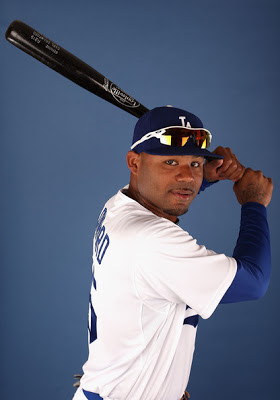 The Los Angeles Dodgers today reinstated outfielder Carl Crawford from the 15-day disabled list and optioned outfielder/first baseman Scott Van Slyke to Triple-A Albuquerque. Crawford last played on June 1, when he suffered a left hamstring strain while legging out a double at Colorado, and went 5-for-13 (.385) with a double and three RBI in four rehab games with Single-A Rancho Cucamonga. Prior to the injury, Crawford batted .301 with nine steals, 12 doubles, five homers and 13 RBI in 51 games with the Dodgers.

Van Slyke has hit .236 with six doubles, six homers and 13 RBI in 27 games during his two stints with the Dodgers this season, last appearing in a game on June 30 against the Phillies.
Posted by Roberto Baly at 3:30 PM