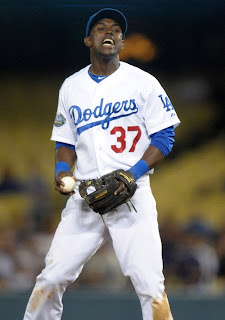 In 80 games at Triple-A Albuquerque this season, Herrera is batting .290 with six home runs, 40 RBI and 14 stolen bases. The 28-year-old has appeared in only three games during two stints for the Dodgers this season, going 2-for-7, while making two starts in left field. Herrera has been a versatile fielder in his career, appearing in games at second base (13), third base (20), shortstop (2) and all three outfield positions (40).

Lilly, 37, was 0-2 with a 5.09 ERA in five starts with the Dodgers this season and posted a 24-21 record with a 3.83 ERA in 58 starts during his four years with Los Angeles. Lilly was acquired by the Dodgers as a part of a five-player trade with the Chicago Cubs on July 31, 2010 and then resigned by the club to a three-year free-agent contract after the 2010 campaign.

The Dodgers now have 38 players on their 40-man roster.
Posted by Roberto Baly at 5:00 PM