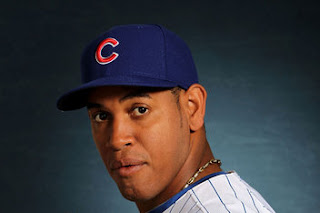 I don't mind this trade at all. We're getting more international bonus money.

Los Angeles Dodgers today acquired right-handed reliever Carlos Marmol and cash considerations from the Chicago Cubs in exchange for right-hander Matt Guerrier. The Dodgers also acquired international signing bonus slot No. 92 valued at $209,700 from the Cubs as part of the deal.

Marmol was 2-4 with a 5.86 ERA and two saves in 31 appearances this season. He struck out 32 in 27.2 innings this year and limited opponents to a .252 batting average, including a .119 mark against left-handers (5-for-42). Prior to being designated for assignment on June 25, Marmol had tossed scoreless relief in five of his last six games.

Guerrier went 6-8 with one save and a 4.24 ERA in 120 appearances during his three seasons with Los Angeles, including a 2-3 mark with a 4.80 ERA in 34 games this season before he was designated for assignment on Sunday. The 34-year-old, who spent the first seven seasons of his career with Minnesota, has gone 25-33 with a 3.54 ERA in 513 career games (three starts).
Posted by Roberto Baly at 11:14 AM

I wonder who we could get for kemp??