Oh yeah! This is exciting! I'm a little late on this. Sorry, I was at the lake. 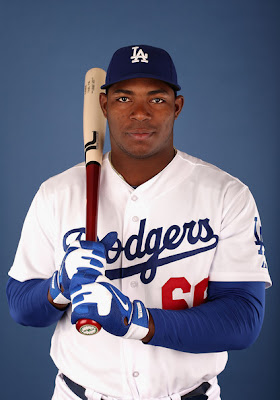 The Los Angeles Dodgers today optioned right-handed pitcher Matt Magill to Triple-A Albuquerque and announced that they will recall outfielder Yasiel Puig from Double-A Chattanooga tomorrow, when the club opens a 10-game homestand against the San Diego Padres. Puig, who will be making his Major League debut, hit .313 with 13 steals, 12 doubles, three triples, eight homers and 37 RBI in 40 games with the Lookouts, leading the Southern League with a .313 batting average and a .599 slugging percentage and ranking among the league leaders in steals (T-10th), doubles (T-5th), triples (T-7th), home runs (T-4th) and total bases (88, 6th). The 22-year-old was hitting .373 (19-for-51) with runners in scoring position for Chattanooga. Puig, who was signed as a free agent on June 29, 2012 out of Cuba, batted .517 with five doubles, two triples, three homers and 11 RBI in 27 Cactus League games with the Dodgers.

Magill was recalled from Triple-A Albuquerque earlier today and started this afternoon’s game at Colorado, allowing seven runs (six earned) in 6.0 innings and taking the loss in the Dodgers’ 7-2 defeat. The 23-year-old has gone 0-1 with a 6.38 ERA in five starts for Los Angeles this season.
Posted by Roberto Baly at 5:30 PM

Can't wait to see Puig play. Hopefully he can play a part in turning this dreadful season around. Vamos chico.