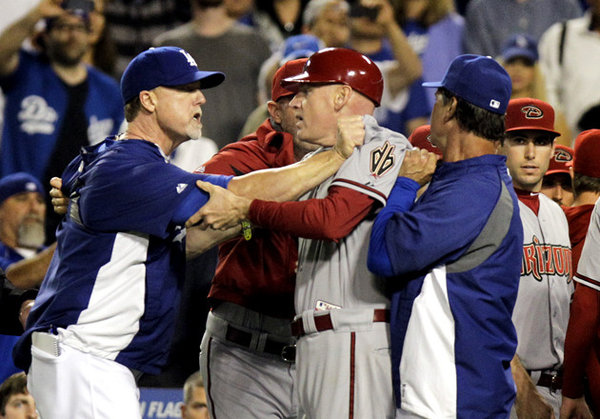 So Zack Greinke hits Miguel Montero. Pay attention to Adrian Gonzalez. He throws his glove in the air as to say "Who wants me?" Kirk Gibson talking too much. He should know that Greinke is just backing up Puig.

So this is the end, right?

No, of course not. Kennedy decides this is not the end so he hits Greinke. And how about Montero looking at Greinke while he's batting. Montero knows exactly what's coming.

Pay attention to Ronald Belisario and J.P. Howell. And how about Mark 'King Kong' McGwire grabbing Matt Williams and Kirk Gibson as if they were two little boys? And Don Mattingly takes down Alan Trammel.

Also, Puig went all crazy at the end. Trust me, don't get a Cuban angry. It's scary.

After the game, Mattingly talks about the fights.

Hopefully no one is hurt.
Posted by Roberto Baly at 8:00 AM

casinos room
Pretty sure he will have a good read. Thanks for sharing!

I'm now not sure the place you are getting your information, but good topic. I must spend a while finding out more or understanding more. Thank you for fantastic information I used to be searching for this info for my mission. Game Poker

Hello, i am glad to read the whole content of this blog and am very excited and happy to say that the webmaster has done a very good job here to put all the information content and information at one place. Berita Bola

Its such as you scan my mind! You appear to grasp such a lot regarding this, such as you wrote the book in it or one thing. i believe that you just may do with some pics to drive the message home to a small degree, however apart from that, this is often nice journal. an excellent scan. Travel Blog Travel News Travel Guide

Thanks so much with this fantastic new web site. I’m very fired up to show it to anyone. It makes me so satisfied your vast understanding and wisdom have a new channel for trying into the world. Ajaxvoices.com Sgcollage.com