The June edition of Dodgers Magazine debuts with a cover of center fielder Matt Kemp. The magazine includes a feature about Kemp’s encounter with Joshua Jones and how Kemp hosted the young man and his family for a Dodger game.

Other features in the magazine include how the art of bunting helps pitchers, A.J. Ellis’ chance encounter with basketball icon John Wooden, Skip Schumaker’s return home to Southern California, Paco Rodriguez’s rise to the big leagues, a retrospective on Dodger Hall of Famer Don Sutton, a look back at some of the late-round finds the Dodgers have had in the June Draft, as well as first-hand accounts about the new Loge Party Boxes. Fans can purchase Dodgers Magazine at any merchandise stand in Dodger Stadium or they can order a subscription at www.dodgers.com/magazine or by calling 877-258-3062. 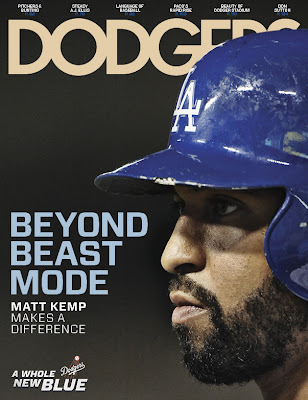