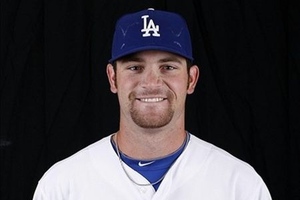 Withrow, who will wear No. 44, will be making his Major League debut and has gone 4-0 with a 1.93 ERA in 22 relief appearances with the Isotopes. The 24-year-old last pitched on Friday, striking out three of the four batters he faced, and has not allowed a run in his last seven appearances (7.2 IP). Withrow, who was selected by the Dodgers in the first round (20th overall) in the 2007 First-Year Player Draft, has only allowed earned runs in two of his 22 appearances this year.

Castellanos, 26, has a .270 batting average with eight steals, nine home runs and 28 RBI in 43 games with Albuquerque this season. Castellanos went 4-for-23 (.174) with a triple, a homer and three RBI in 16 big league games with the Dodgers last year and tied for the Dodger team lead with both four home runs and 11 RBI in 29 Cactus League games this spring.

Van Slyke is batting .221 with six home runs, five doubles and 11 RBI in 24 games with the Dodgers, while Sellers posted a .188 batting average with a home run, a double and two RBI in 27 contests for the club.
Posted by Roberto Baly at 4:00 PM