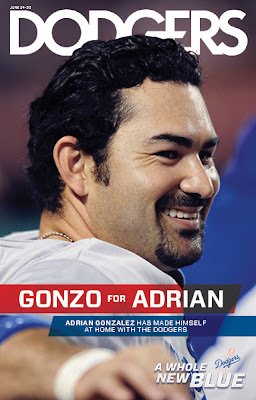 The seventh edition of Dodgers Playbill with a cover photo of Dodger first baseman Adrian Gonzalez is available to fans upon entering Dodger Stadium parking gates. The Playbill includes a story on Gonzalez’s first full year in Dodger blue, as well as stories on Yasiel Puig’s meteoric rise, Pedro Guerrero’s historic June 1985 and the Dodgers’ opening the 2014 season in Australia. Information on Dodger promotions and ticket deals is also included. Fans receive the playbill when entering parking gates or at Fan Services stations throughout the stadium.
Posted by Roberto Baly at 12:30 PM