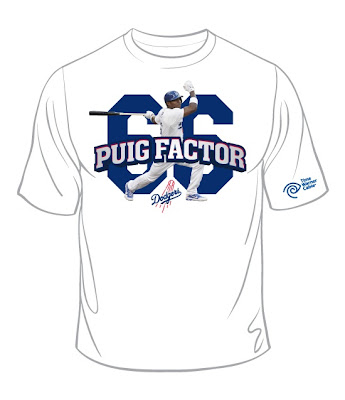 The Dodgers announced today that Yasiel Puig T-Shirt day presented by Time Warner Cable is set for Sunday, July 14 vs. COL at 1:10 p.m. The giveaway is for the first 40,000 fans in attendance on July 14. The Puig T-shirt will be available in sizes medium and extra-large.

After his first week in the Major Leagues, Puig was named National League Player of the Week having led baseball with 27 total bases and was tied for the Major League lead with four home runs. His .964 slugging percentage was second-best in the Majors and was the top mark among National Leaguers. Since then, the 22-year-old native of Cienfuegos, Cuba continues to lead the Majors with a .442 batting average and 34 hits, while ranking among the big league leaders in home runs (7, T-5th), RBI (14, T-19th), on-base percentage (.476, 4th) and slugging percentage (.753, 2nd). Puig is hitting .462 (6-for-13) with runners in scoring position.

This year’s All-Star game ballots are now available throughout the stadium and fans are encouraged to vote in stadium and online at www.mlb.com/vote. Fans can vote for Puig as a write-in candidate on this year’s ballot, hoping to make him the second Dodger (Steve Garvey ’74) and third Major Leaguer overall (Rico Carty, ATL, ’70) to win a starting All-Star spot via the write-in vote. Dodger fans can cast their vote up to 25 times online and can also cast an extra 10 ballots by connecting to their mlb.com account. The game will be held on July 16 at Citi Field in New York. The Dodgers on the 2013 ballot are Adrian Gonzalez (1B), Mark Ellis (2B), Hanley Ramirez (SS), Luis Cruz (3B), Carl Crawford (LF), Matt Kemp (CF), Andre Ethier (RF) and A.J. Ellis (C).

Tickets for Yasiel Puig T-Shirt day presented by Time Warner Cable on July 14 can be purchased by visiting www.dodgers.com/tickets, www.losdodgers.com/boletos or by calling 866-DODGERS.
Posted by Roberto Baly at 6:36 PM