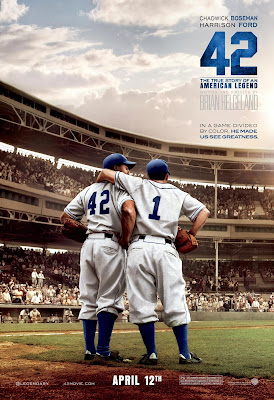 A made in Hollywood doubleheader-a Dodger game and a movie-will be coming to Dodger Stadium on Saturday, July 13.

For the first time, Dodger fans can enjoy a game and a movie when they attend the Los Angeles Dodgers game with the Colorado Rockies on Saturday, July 13 at 4:15 p.m. Following the game, fans can take in Legendary Pictures' "42" starring Harrison Ford and Chadwick Boseman, in advance of the Blu-rayTM Combo Pack release from Warner Bros Home Entertainment Inc. the following Tuesday, July 16.

The first motion picture to be featured on Dodger Stadium's new hexagonal high definition video screens, "42" depicts the true story of an American Legend and Hall of Fame Dodger Jackie Robinson, who was the first African-American to play Major League Baseball.  The movie focuses on his life immediately leading up to, and during his first season, 1947.

Robinson was the first African-American to play Major League Baseball and the movie focuses on his life after he entered the game signing with the Dodgers in 1947.

A ticket to the Dodgers-Rockies game includes the screening of the movie "42" following the conclusion of the game.

Saturday is also On-Field Photo Day at Dodger Stadium, where fans have the opportunity to take photos with Dodger players and coaches on the field prior to the game. The homestand opens with a pair of 7:10 p.m. games, including Adrian Gonzalez Bobblehead Night Thursday, July 11 and Friday Night Fireworks the following night. The finale of the series with the Rockies on Sunday, July 14 is at 1:10 p.m. and Viva Los Dodgers will precede the game, starting two hours before the contest in Lot 6.

The movie "42" is rated PG-13. Parents are strongly cautioned that some material may be inappropriate for children under the age of 13. The true story film includes profane and offensive language, including racist slurs, and violence.

Tickets can be purchased by visiting www.dodgers.com/tickets or by calling 866-DODGERS.
Posted by Roberto Baly at 3:30 PM