What's going on at Dodger Stadium for three game series against the Washington Nationals?

Veteran of the Game is U.S. Army National Guard Staff Sergeant Monica Virag of Los Angeles. Virag enlisted in 1996.  Her duties included Fuel Operations responsible for refueling of aircrafts and operating and maintaining valves, pumps and filters on fuel transport vehicles. Virag is trained in the containment of fuel spills and frequently called upon to assist with advanced training in refueling.  She currently serves with the 224th Sustainment Brigade in Long Beach, CA. Virag is a two-time Operation Iraqi Freedom veteran and her accolades include the National Defense Service Medal, Global War on Terrorism Service Medal and Combat Action Medal. 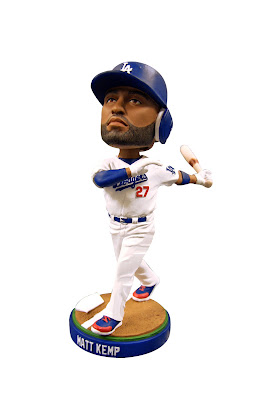 The first 50,000 fans in attendance will receive a Matt Kemp bobblehead presented by UnitedHealthcare. Auto and stadium gates open early at 4:40 p.m. Singer, rapper and Los Angeles native Becky G. will sing the national anthem. Her hit single is “Play it Again” and she performed at KIIS FM’s Wango Tango this weekend.

Hip-hop violinist Josh Vietti will perform pregame Tuesday. Vietti has performed at an NBA All-Star game, on the Ellen show and opened for Earth, Wind and Fire at the Nokia Center. He first performed at Dodger Stadium as part of Reserve level plaza Sunday entertainment on April 28.

Tuesday’s Veterans of the Game is U.S. Army Sergeant Tracey Cooper-Harris of Jersey City, New Jersey. Cooper-Harris served as an Animal Care Specialist assisting the Veterinary Corp Officer in providing care and treatment to Military Working Dogs, government owned animals and the pets of active duty and retired military members.  The Military Working Dogs are used in detention and apprehension and detecting narcotics and explosives on military installations and government venues. Cooper-Harris served during Operation Enduring Freedom and Operation Iraqi Freedom and is a member of Iraq & Afghanistan Veterans of America. Her accolades include the Global War on Terrorism Expeditionary Medal, Army Commendation Medal and Army Achievement Medal.

Standup comedian and actor, who is best known for his roles in in “Next Friday,” “Friday After Next” and “The Hangover”, Mike Epps will throw the ceremonial first pitch. He will reprise his role as “Black Doug” in the upcoming release of “Hangover III.” Epps will also announce the Dodger starting lineups.

Tickets for games Monday through Wednesday against Washington can be purchased by visiting www.dodgers.com/tickets or by calling 866-DODGERS.