What's going on at Dodger Stadium for three game series against the Miami Marlins?

For the series against Miami, Levy Restaurants is offering a special extreme loaded dog, the Cuban Dog, an all-beef hot dog with carnitas, shredded lettuce, diced tomatoes, shredded Provolone with a pickle spear.

Clayton Kershaw souvenir cups will be available for purchase throughout the stadium.

All fans are invited down to the field for Friday Night Fireworks presented by Denny’s.

Up and coming country music singer and songwriter Lizzie Sider will sing the national anthem. Tomorrow’s Veteran of the Game is U.S. Navy Petty Officer First Class Jason Lopez of Riverside. Lopez enlisted in 2000 and became an Aviation Structural Mechanic. Lopez has been deployed all over the world and served onboard the USS Carl Vinson with Strike Fighter Squadron 22.  This was the first squadron to launch air strikes in Afghanistan following the September 11 attacks.  He currently serves as instructor training F/A-18 Hornet Maintainers at Naval Air Station Lemoore, CA. Lopez’s accolades include the Navy and Marine Corps Achievement Medals, Meritorious Unit Commendation and the Global War on Terrorism Expeditionary Medal. 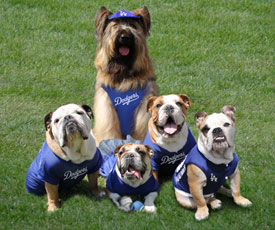 It is Natural Balance Bark in the Park Night at Dodger Stadium. Fans that purchase a special event ticket in the Coca-Cola All-You-Can-Eat Right Field Pavilion are invited to bring their dogs to the park. The Academy Gate will open at 3:10 p.m. Natural Balance Bark in the Park begins at 4:10 p.m. with a pre-game “Pup Rally” in Parking Lot G between the left and Right Field Pavilions. Each dog and their owners will receive a goodie bag. The rally will feature photo opportunities with Tillman the dog and Dodger alumnus Steve Garvey as well as contests including: Dog that looks most like Tillman, Dog that shows most Dodger Spirit, Biggest Dog and Smallest Dog.

Immediately following the “Pup Rally” fans will parade around the warning track of the field with their dogs. Tickets can be purchased by visiting www.dodgers.com/barkinthepark. The Dodgers will donate a portion of the proceeds to the Society for the Prevention of Cruelty to Animals, Los Angeles.

Tillman the dog will participate in the ceremonial first pitch for Natural Balance Bark in the Park. Rebecca Crews, wife of actor Terry Crews, will sing the national anthem.

The Dodgers, C.I.C.L.E., the Eastside Bike Club, and Metro will kick off Bike Week Los Angeles with the “Bikes, Baseball and Dodger Blue Ride,” a special bicycle ride between historic landmarks Union Station and Dodger Stadium at 2:00 p.m. Saturday. More than 100 cyclists riding to Dodger Stadium will be greeted in Lot B upon arrival at Dodger Stadium at approximately 3:15 p.m. by Hall of Fame Manager and Special Advisor to the Chairman Tommy Lasorda. They will then go on a stadium tour starting at the Reserve Level and attend the game. Fans can purchase tickets to participate in this event by visiting www.dodgers.com/metro.

Saturday’s Veterans of the Game are U.S. Navy Chief Warrant Officer Alejandro Valdez of Fresno and Petty Officer 3rd Class Diane Valdez of Lake View Terrace. Alejandro and Diane, who are husband and wife, met at a Dodger game. Alejandro is a Weapons Ordnance Officer and leads operations of the Navy’s weapons systems including troubleshooting on the F/A- 18E/F super Hornet aircraft.  Diane Valdez served has an Aviation Logistics Supply Technician.  They both served with squadrons at Naval Air Stations at China Lake, CA and Lemoore, CA.  They have served 10 deployments combined including supporting Operation Iraqi Freedom and Operation Enduring Freedom. Their accolades include Navy and Marine Corps Achievement medals, a Global War on Terrorism Expeditionary medal and a Humanitarian Service medal. 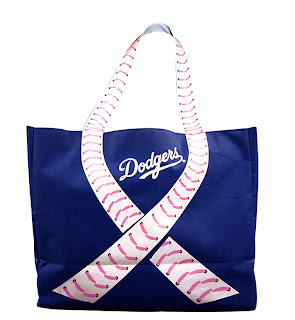 The Dodgers will celebrate Mother’s Day with a special postgame Walk Around the Park and a Tote Bag giveaway presented by Murad Skincare and Viva Los Dodgers Day at Dodger Stadium (vs. MIA, 1:10 p.m.). Auto and stadium gates open early at 10:40 Viva-Los-Dodgers (2)a.m. The first 40,000 fans in attendance this Sunday will receive a Mother’s Day tote bag presented by Murad skincare. Dodger players’ mothers and wives will be on hand for Mother’s Day at Dodger Stadium.

Major League Baseball announced the 30 winners of the 2013 Honorary Bat Girl Contest that recognizes baseball fans who have been affected by breast cancer and demonstrate a commitment to eradicating the disease. The winner of the Honorary Bat Girl Contest for the Dodgers is Sara Aguilera, who will be recognized in a pregame ceremony Sunday. Aguilera’s sons Jaden and Jordan will officially start the game with “It’s Time for Dodger baseball!”

Aguilera is one of 30 winners, one per MLB Club, who will take part in pregame activities, be honored during an on-field ceremony, and will receive pink MLB merchandise and two tickets to the game. Nominated by her parents, Sara, wife of John and mother of two boys, Jaden, 7 and Jordan, 5, found a lump in her right breast on April 30, 2012. She had a biopsy May 4, received the diagnosis of Stage 2 Colloid Carcinoma on May 8, and underwent a double mastectomy on June 8. She began her five-year-course of tamoxifen in July 2012. Sara’s first reconstructive surgery was October 17 and she requires two surgeries in the near future. Less than one year since discovering her lump, Sara has founded “Feel Yourself Up”: A Breast Cancer Awareness Organization Promoting Self-Examination. Through this organization, she plans to raise awareness about the importance of early detection through self-examination, and to raise money for those needing help with expenses of day-to-day life while fighting breast cancer.

The 30 Honorary Bat Girl winners were selected by fan votes on HonoraryBatGirl.com along with feedback from a Guest Judging Panel that included Dodger center fielder Matt Kemp, CC Sabathia of the New York Yankees, Andrew McCutchen of the Pittsburgh Pirates, Alex Gordon of the Kansas City Royals, Maria Menounos of Extra TV and Sam Ryan, MLB Network host and reporter.

Louisville Slugger, the official bat of MLB, will introduce a new design element to their iconic pink bats that are used by hundreds of players throughout the League on Mother’s Day. The hot pink color was introduced in 2012 and this year, it will include the new Louisville Slugger logo, which changed on MLB’s Opening Day, marking the bat maker’s first logo change in 33 years and only the second significant change in its 129 years in professional baseball.  Louisville Slugger and MLB first introduced the pink bat program on Mother’s Day in 2006.  Fans can obtain their own personalized pink bat by going to going to shop.mlb.com or sluggergifts.com.  Game-used Louisville Slugger pink bats from Mother’s Day games will be auctioned exclusively on MLB.com to raise funds for the fight against breast cancer.

In addition, MLB licensee Phiten will feature a pink compression sleeve for the first time ever, as well as bring back its pink necklace, which was introduced in 2010. Players throughout the game will be wearing the necklaces and/or compression sleeves in honor of Mother’s Day activity. As in years past, players will also use pink Franklin batting gloves, pink Under Armour cleats and pink EvoShield protective gear. Additionally, both players and on-field personnel will wear pink wristbands as well as symbolic pink ribbons on their uniforms. Commemorative base jewels and dugout lineup cards will also be pink.

The Honorary Bat Girl program was introduced in 2009 to raise additional awareness and support for the annual “Going to Bat Against Breast Cancer” initiative celebrated on Mother’s Day. In four years, over 4,000 testimonials have been submitted and more than 10 million fan votes have been cast. Going to Bat Against Breast Cancer is a Major League Baseball initiative supported by its charitable partners Stand Up to Cancer, a charitable program of the Entertainment Industry Foundation, and Susan G. Komen for the Cure. This initiative has set out to raise awareness about the breast cancer cause and funds to support life-saving breast cancer research.

The Dodgers will recognize the work and efforts of the Susan G. Komen Race for the Cure which took place at Dodger Stadium earlier this year. The first place survivor of the 5k, men’s and women’s 5K and 10K and the top fundraiser will be introduced and a Race co-chair will throw a first pitch. Fans can support Komen LA County by purchasing a special priced ticket at www.dodgers.com/thinkpink through the end of the day Saturday and are encouraged to wear pink to the game Sunday. A portion of each ticket purchased through the special link will be donated Komen LA County.

Sunday’s Veteran of the Game is U.S. Army Sergeant First Class Debbie Carter of Chicago. Carter enlisted in 1984 and began her career as a Wheeled Vehicle Mechanic serving in Germany then moving on to the transportation field as a Vehicle Operator serving various missions in Southwest Asia.  Her other deployments include Kuwait, Saudi Arabia and various locations throughout the U.S.  She currently serves with the 79th Sustainment Support Command in Los Alamitos providing career guidance and training. Carter’s accolades include the Meritorious Service medal, Army Achievement medal and an Army commendation medal.

Following Sunday’s game is Mother’s Day Walk Around the Park. Mothers and their families are invited to take a walk around the park on the warning track.
Posted by Roberto Baly at 1:30 PM