What's going on at Dodger Stadium for three game series against the St. Louis Cardinals?


For the series against St. Louis, Levy Restaurants is offering a special extreme loaded dog, the St. Louis BBQ dog will feature an all-beef hot dog topped with pulled pork and crispy onions. Extreme loaded dogs concession stands are located on the Loge and Reserve level.

Lil Jon, rapper, record producer, entrepreneur and international DJ who was a member of the group Lil Jon & The East Side Boyz, will throw the ceremonial first pitch. Lil Jon will also announce the Dodgers’ starting lineup.

It is YMCA Night at Dodger Stadium. Several local YMCAs will be on hand.

Tonight, U.S. Army Specialist Tyler Jeffries will officially start the game with “It’s Time for Dodger Baseball!” Jeffries was deployed to Afghanistan in April 2012 and spent six months overseas until he was severely injured on a clearing mission in October 2012. Jeffries lost both of his legs and is undergoing vigorous physical and occupational therapy at the Walter Reed National Military Medical Center in Washington D.C. He is currently in Los Angeles to meet his new Red Cross service dog and service dog trainer, Brandon McMillan, who has been preparing Jeffries’ new dog to be of service to him.

Tonight, A.J. Ellis and Brandon League will host a total of 500 guests from Vision to Learn, including kids who received eye glasses through the charity and their families. The Los Angeles Dodgers Foundation recently partnered with Vision To Learn, a non-profit organization that provides free eye exams and free glasses to elementary students in low-income communities throughout Los Angeles, and held a launch event on May 13 at Dorris Place Elementary School, where Dodger General Manager Ned Colletti, Ellis and League joined the charity’s founder, Austin Buetner, to distribute glasses to students. The youngsters will be recognized on the field as part of pregame ceremonies. The Vision to Learn Mobile Eye Exam vehicle will be in lot F.

All fans are invited down to the field for Friday Night Fireworks presented by Denny’s. 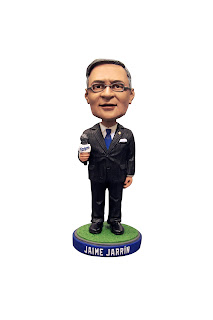 It is Jaime Jarrín Bobblehead Night presented by Time Warner Cable. Auto and stadium gates open early at 1:45 p.m. The first 50,000 fans in attendance will receive the first-ever Dodger Stadium bobblehead of Jarrín. The first 20,000 fans will receive a Universal Studios coupon for a free kids’ ticket with a purchase of an adult ticket.

The Hall of Fame Dodger broadcaster and “the Spanish Voice of the Dodgers” is in his 55th season at the helm of the Dodgers’ Spanish-language radio broadcast on Univision Radio KTNQ 1020 AM. A native of Ecuador, Jarrín began his professional baseball broadcasting career in 1959 with the Los Angeles Dodgers, the same year the club won the World Series, the first in Los Angeles franchise history.

He was inducted into the National Baseball Hall of Fame in 1998 as the recipient of the Ford C. Frick Award. During his unprecedented Spanish-language broadcasting career, he has called three perfect games, 16 no-hitters, 26 World Series and 21 All-Star Games. Jarrín called the Dodgers’ World Championships in 1959, ’63, ’65, ’81 and ’88. Since broadcasting his first game on April 14, 1959, Jarrín has called countless iconic moments in Los Angeles Dodger history.

Saturday’s Veteran of the Game is U.S. Army Master Sergeant Bobby Farmer of Bluefield, West Virginia. Farmer enlisted in 1992, took Special Forces training and was assigned to the 3rd Special Forces Group. Farmer was an engineer with Operational Detachment Alpha 391. He has served in Kosovo, Africa, Iraq and Afghanistan on several deployments. He is currently undergoing treatment for injuries he sustained from an improvised explosive device. His accolades include the Bronze Star for Valor, the Army Commendation for Valor and the Purple Heart.

At each Viva Los Dodgers, the Dodgers recognize outstanding leadership and service in the Latino and greater Los Angeles community with the “Heroe de la Comunidad” award. This Sunday’s recipient is Executive Director of the Weingart East LA YMCA and Southeast Rio Vista YMCA Victor Dominguez.

Cedric the Entertainer, actor, comedian and director best known as the co-star of “The Steve Harvey Show,” as Eddie in the Barbershop films, and as one of the four comedians featured in the Spike Lee film “The Original Kings of Comedy,” will throw the ceremonial first pitch. He will also announce the Dodgers’ starting lineup and officially start the game with “It’s time for Dodger baseball!”

NFL Network “Thursday Night Football” and “Game Day Morning” host Rich Eisen will throw the ceremonial first pitch. Eisen also has a podcast that can be downloaded on iTunes.

Sunday’s Veteran of the Game is U.S. Army and Air Force Staff Sergeant Nick Domigo of Bicknell, Indiana. Domigo enlisted in 1942 and served as a Military Police Officer with the Air Force, the 777th Anti-Aircraft Artillery Battalion and the 80th Air Base Group and as battalion cook. Domigo served in in both World War II and the Korean War. Domigo has been a Dodger fan since the club played in Brooklyn.

It is the last Little League Parade of the season. The Dodgers have hosted youth baseball teams from throughout Southern California for decades. Each season, thousands of youth baseball and softball players and their families visit Dodger Stadium. Little League parades around the warning track include several hundred youngsters and occur prior to games on select Sundays during homestands.

Tickets for games Friday through Sunday against St. Louis can be purchased by visiting www.dodgers.com/tickets or by calling 866-DODGERS.