Matt Kemp talks about the video that went viral 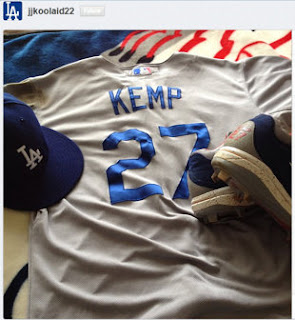 Yesterdays post on Matt Kemp giving away his hat, jersey and shoes went viral. {linked here} It seems every major sports blog linked me. Thanks to those that did. I never expected that type of reaction.

On Monday night while watching the Dodgers/Diamondbacks game, I went over to YouTube to search for a video of when Matt Kemp injured his shoulder last year. I wanted to post the video here and talk about what Jon Weisman had posted earlier. {linked here} It's a interesting article on how Adrian Gonzalez admits that he won’t have the same power as he did before undergoing labrum surgery. Kemp also had labrum surgery last winter.

Fans seem to think it's easy to come off that type of surgery and magically hit 50 homers.

Anyway, while searching that video I came upon the video of where Kemp gives away these special items to a disabled fan last weekend in San Francisco. Not much was said in the video description. Only that he was going through a tough battle. I almost did cry.

I look around the web to see if anyone had posted this video. I didn't see anything. I was too tired to post it that night so I decided to leave it for the morning. After posting the video, I noticed right away it was going to be a big story. Deadspin, Yahoo!, NBC Sports, Sports Illustrated and other blogs grabbed the video and were nice enough to link this blog.

But who is this kid and what is he going through? Why did Matt Kemp do this kind act? Tim Brown of Yahoo! Sports has the story of Joshua Jones that has cancer, unable to move around and is dying.... {linked here}

And yet when Kemp awakened Tuesday morning, 36 hours afterward, his phone told him otherwise. The video was everywhere.

No, there was never supposed to be evidence beyond the ailing boy's memory, and perhaps a shelf in his room. Maybe he's wearing Kemp's cap. Maybe he's still holding Kemp's gray road jersey and spikes.

"I didn't know that anybody was filming it," Kemp said Tuesday afternoon. "I wasn't aware."

A boy, Joshua Jones, and his father, Steve Jones, sat Sunday night in front-row seats at AT&T Park in San Francisco. The boy was in a wheelchair. Early in the game between the Los Angeles Dodgers and San Francisco Giants, the father struck up a conversation with Dodgers third base coach Tim Wallach. He said his son was very sick, that he was a Dodgers fan, and that his favorite player was Kemp. The boy, who has cancer, is unable to speak.

"He just kind of looked at me," Kemp said.

Wallach brought them a baseball. Later in the game, he told Kemp about Joshua. And when the game ended – Kemp had made the last out in a loss, the Dodgers' fourth in a row – Wallach returned to the dugout and found Kemp waiting for him. He wanted to go see the boy in the stands.

In the video that was recorded and uploaded by Tommy Schultz, a friend of Joshua,  Kemp and Wallach walk together toward the ailing boy and his father. Kemp reaches out to shake the Joshua's hand, and instead he gets a baseball, which the boy had in his right hand.

Seated below field level, the boy looks with wide eyes as Kemp signs the baseball. The boy beams silently. Kemp returns the ball and then, in a ballpark full only a few minutes before, as onlookers laugh and cheer, Kemp removes his cap and hands it to the boy. He pulls his jersey – No. 27 – over his head and hands that, too, over the rail. And he unties his cleats, pulls off the right and then the left, and gives them to the boy so that his lap is piled with most of Matt Kemp's uniform.

Read the rest of this story. It's heartwarming. {linked here}

And here's a video from Dodgers.com

Such an amazing gesture. Much, much kudos to Kemp for this. What seals it for me was that this was just a personal gesture by Kemp, nothing publicized just a man at work doing a very kind deed.

thank you matt kemp you made me proud to be a lifelong dodgerfan,this is right up there with rick monday saving the american flag, you are highly commended i take my hat off for you,may you have a great rest of your life peace to you a true dodger hero thanks dodgerfantony@yahoo.com

I wish all athletes had Matt Kemp heart.

I love this story about Matt Kemp. I think he is truly one of the "good guys" in baseball today.