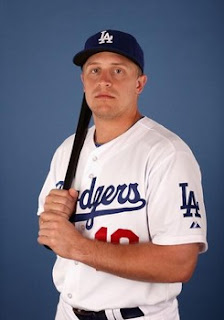 The Los Angeles Dodgers today recalled catcher Tim Federowicz from Triple-A Albuquerque and optioned infielder Justin Sellers to Triple-A Albuquerque. Federowicz was recently named the Pacific Coast League Player of the Week for the period of April 29-May 5, batting .571 with three doubles, a triple, three homers and six RBI in that span, and overall was hitting .531 with seven homers and 20 RBI in 13 games with the Isotopes. Federowicz enters his third stint of the season with Los Angeles after making the Opening Day roster and has appeared in three Major League games this season, going 0-for-5 with a walk.

Sellers was batting .191 with one home run, one double and two RBI in 26 games this year for the Dodgers.
Posted by Roberto Baly at 4:05 PM